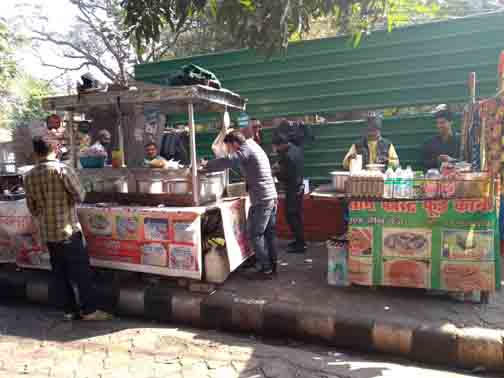 By OUR STAFF REPORTER
DEHRADUN, 20 Dec: In the last few months, a roadside food court has sprung up on the Rajpur Road right opposite the Pacific Mall, abutting the boundary wall of Bajaj Institute of Learning for the Deaf. This has obviously mushroomed with the connivance of the beat constables and the local authorities. In spite of several requests from the school authorities and complaints to the local police station, and the SSP, the food thelas have refused to move maybe because they are feeding and satisfying the policemen on duty under whose patronage they are thriving. A new one crops up every week or fortnight. Apart from the nuisance they create, it is also a health hazard. All the leftover food and trash is pushed in the drains of the road which stink with rotting food and muck of the washed utensils and some of it also seeps into the school. The school boundary wall is being used as a table top.
Every vehicle going towards Mussoorie passes by this point including those of senior government officials and the public representatives. Do the great ones close their eyes and noses while passing by? At a time when the country and the state is emphasising Swachh Bharat, it is a shame to see such a sight and smell such obnoxious smells. There is no pathway left for walking as the whole of it is occupied by the roadside bazaar. Apart from the food, they also sell gutkas and local alcohol and maybe drugs, also. After consuming the ‘daaru’, they have drunken brawls with each other. As per government laws, such vendors are not allowed near educational institutions.
Also, on the other side of the gate, an auto rickshaw stand has come up, sometimes blocking the gate. The students of Bajaj Institute are deaf and mute, they cannot hear the honking or the sound of the autos. This can any day result in an unwarranted accident. Who will be responsible?
Will the authorities concerned pay heed to this problem and get the walkways cleared by getting the carts removed?

Garhwal Post has established itself as a credible, balanced and forward looking newspaper in India. Based in Uttarakhand, the daily is read by the aware, socially and culturally responsible, high-income elite of society.
Contact us: info@garhwalpost.in
dating over 60