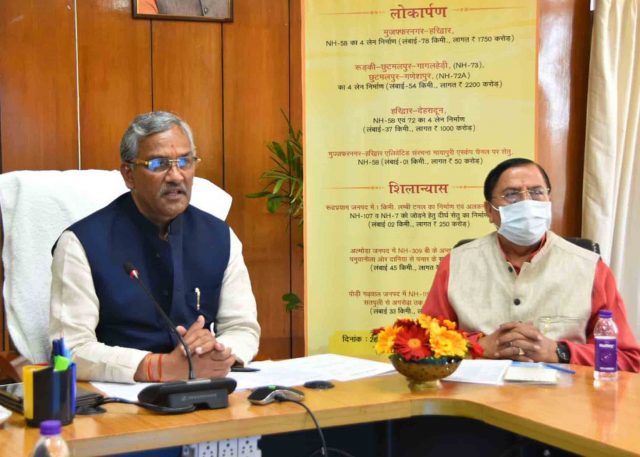 By Our Staff Reporter
Dehradun, 26 Feb: Union Road Transport and Highways Minister Nitin Gadkari today virtually inaugurated and laid the foundation stones for 250 kilometres of roads in Uttarakhand at a cost of Rs 5400 crores. Chief Minister Trivendra Singh Rawat presided over the event.
Gadkari revealed that approval for the CRF had been increased ten-fold at the request of the state. On receiving the proposal, works worth Rs 250 crores would get the green signal.
The highways dedicated to the public today include the 4-lane Muzaffarnagar-Highway NH 58; Roorkee-Chhutmalpur-Gagalhedi NH 73; Chhutmalpur-Ganeshpur NH 72A; Haridwar-Dehradun NH 58 and 72 four lane construction; and a bridge on the Muzzafarnagar-Haridwar elevated road over the Mayapuri Escape Channel. Similarly, foundation stones of a kilometre long tunnel in Rudraprayag; a bridge over the Alaknanda River on NH 107; projects in Almora and Pauri Garhwal were laid.
Expressing happiness, Minister Gadkari said that these projects were completed despite all the difficulties. He had promised that these would be completed before the Kumbh Mela.
He pointed out that the bypass on Muzzafarnagar-Haridwar NH 58 would relieve traffic pressure on Purkazi, Roorkee and Bahadarabad. It would make travel to Haridwar easy and quick. It would increase job opportunities and boost tourism. The journey between Haridwar and Dehradun would also become easier. He also mentioned the 3 elephant corridors to be made for the Rajaji Tiger Reserve wildlife. The bypass would make the traffic situation in Doiwala better. The other projects would also provide similar improvements for travellers.
Union Education Minister and Haridwar Lok Sabha MP Ramesh Pokhriyal ‘Nishank’ said these projects will boost development in the area.
He said these projects will not only help reduce travel time, but also be environmentally sustainable. “The travel time between Muzaffarnagar to Haridwar will reduce by 90 minutes. Apart from this, the 2.5 km elevated section and 1.6 km bypass will help in traffic management during Kumbh Mela and Kanwar Yatra,” the Union Minister said.
Nishank said that since almost all the black spots have been rectified, accidents on the highway will come down.
Ambulance and patrol teams have been deployed on the entire highway section to help the travellers in any emergency while advanced highway traffic management systems including five cameras, variable message display systems and an emergency connectivity system have also been installed.
The Union Minister shared information about the initiative launched by the Education Department under which technical institutes including IITs, NITs and other engineering colleges approved by AICTE across the country have associated with the NHAI to adopt the adjoining areas around the NH for technical advancement.
Union Minister of State for Road Transport and Highways Gen V K Singh (Retd), Union Minister of State for Animal Husbandry, Fisheries and Dairying Sanjeev Balyan, several ministers from Uttarakhand and Members of Parliament also attended the video conference.