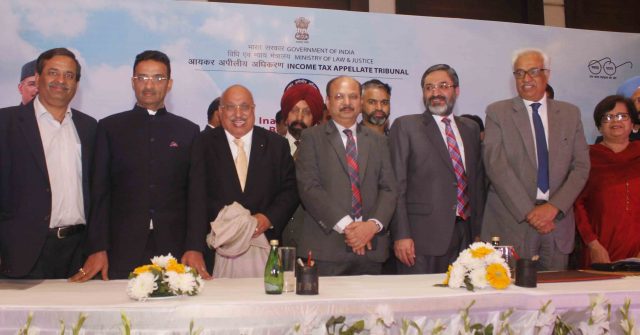 DEHRADUN, 27 Feb: Union Law Minister Ravi Shankar Prasad today called upon the professionals in the country to declare their actual income and pay income tax honestly. He was speaking as Chief Guest at the inauguration of a circuit bench of the Income Tax Appellate Tribunal (ITAT) in Dehradun. Prasad said it was a matter of concern that in a big country like India, which had a very large number of professionals like lawyers, doctors, chartered accountants, architects and consultants, only 2000 professionals had declared an income of more than Rs 1 crore. He added that, in a country with a population of 135 crores, only fifty thousand non- corporate tax payers declared an income of more than Rs 10 lakhs.

He added that 2 crores Indians travelled abroad last year while 2.5 crores purchased cars, but tax collection was not commensurate with this data. He reminded that Prime Minister Narendra Modi had given a call to the nation to pay taxes honestly and had promised honest use of taxpayers’ money to take the country ahead and to build more roads, hospitals and schools, etc. Prasad said that the Dehradun circuit bench of ITAT would provide convenience to the direct tax payers of Uttarakhand in easier and faster disposal of their tax disputes. He called upon the officials of Income Tax Department, particularly Commissioners of Income Tax, ITAT officers, and the High Court and Supreme Court to try to complete the hearing of all pending cases of disputes regarding Income Tax Returns by 31 March. Claiming that he had a special personal attachment with Uttarakhand, he disclosed that Chief Minister Trivendra Singh Rawat had pointed out to him there was a problem in internet connectivity at Dehradun Airport and he had, therefore, got a WiFi network established there today, itself. Speaking about the current issue of CAA, Prasad asserted there was no question of going back on the law, but the government would continue to engage with the opponents of CAA and explain to them it was not at all connected with any Indian citizen, including the Muslims, and only was about granting citizenship to the people from Pakistan, Bangladesh and Afghanistan who were being persecuted on religious grounds. He, however, admitted that it was not easy to awaken those who were only pretending to be asleep. He also asserted that India could not have shied away from the suffering of the religious minorities from the three neighbouring countries. Chief Minister Trivendra Singh Rawat said that, under the dynamic leadership of Prime Minister Narendra Modi, the country was making rapid progress towards digitalisation. In order to reduce human interaction, Uttarakhand too had introduced self assessment of House Tax in Municipal Corporations and would now extend the same to Municipal Councils as well. He expressed the hope that, with the setting up of ITAT in Dehradun, the tax payers and their lawyers or CAs would be relieved of the inconvenience of going to Delhi to file an appeal with the ITAT or for hearings. Rawat further thanked Union Minister of Jal Shakti Gajendra Shekhawat, who was also present on the occasion, for assuring cooperation and help in water supply and other projects. Shekhawat reached here from Nainital, where he had reviewed some projects related to his ministry. President of ITAT, Justice PP Bhatt, Vice President, ITAT Delhi Zone, GS Pannu, Speaker Premchand Aggarwal, MLAs Harbans Kapoor, Munna Singh Chauhan, Vinod Chamoli, Sahdev Pundeer, Umesh Sharma ‘Kau’ and Khajan Das, and senior BJP leaders Anil Goyal and Puneet Mittal besides Deepti Rawat were also present on the occasion. On this occasion, senior chartered accountant Hemant Arora was also honoured. A large number of Income Tax lawyers and chartered accountants including Verendra Kalra were also present.