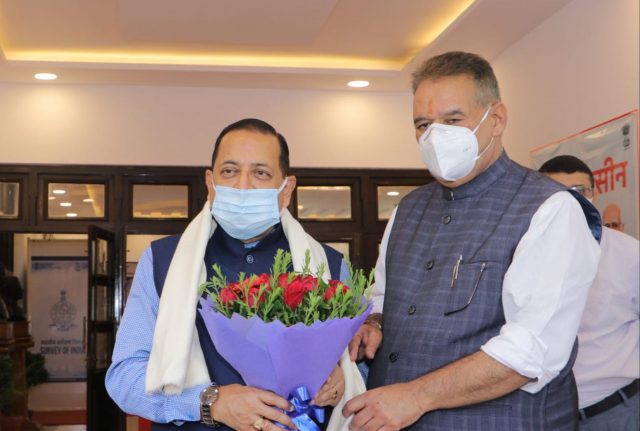 By Our Staff Reporter
Mussoorie, 10 Sep: Union Minister of State for Science and Technology (Independent Charge) Dr Jitendra Singh visited Mussoorie today. Tight security arrangements have been made for the Union Minister’s visit. Jitendra Singh participated in a programme organised at the Lal Bahadur Shastri National Academy of Administration in the evening. Dr Jitendra Singh will remain in Mussoorie, today, and leave for Delhi tomorrow.
It is worth noting that, recently, Rajya Sabha MP Anil Baluni had campaigned to build a Tata Cancer Hospital in Uttarakhand. The Prime Minister’s Office was also approached on this. Union Minister of State at the PMO Jitendra Singh said that talks are on with the Tata Trusts and a cancer hospital would soon open in Uttarakhand.
Cabinet Minister Ganesh Joshi welcomed the Union Minister in the office of Survey of India, Hathibarkala, in Doon. Surveyor General Naveen Tomar informed them about the achievements and functioning of the department. The upcoming assembly elections and various other issues were discussed by the ministers. The Cabinet Minister said that he receives guidance from the Union Minister from time to time. He said that, in the upcoming assembly elections, the Bharatiya Janata Party is again going to form the government in Uttarakhand with a thumping majority.

Garhwal Post has established itself as a credible, balanced and forward looking newspaper in India. Based in Uttarakhand, the daily is read by the aware, socially and culturally responsible, high-income elite of society.
Contact us: info@garhwalpost.in
filipino ofw dating site https://garhwalpost.in/funny-dating-headlines/