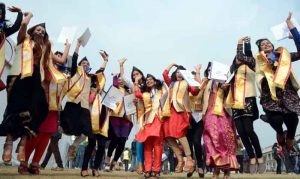 DEHRADUN, 30 Nov: Governor Baby Rani Maurya awarded the degrees and medals at the First Convocation of Doon University, here, on Friday. The Governor, who is also the Chancellor of Doon University, honoured MP and former Union Minister Dr Murli Manohar Joshi and famous folk singer Narendra Singh Negi with honorary degrees of Doctor of Science and Doctor of Literature, respectively.

Degrees were awarded to students who passed out from year 2011 to 2016. These include 617 Post Graduates, 380 Graduates and 5 PhD recipients. The Governor conferred Gold Medals on 44 students who received the highest marks in the first attempt.

In her convocation address, Governor said that universities have great responsibility in promoting research work as per the needs of society and to assist in the formulation of policy for overall development. The university is not a mere degree giving institution. Universities have a vital role in the overall development of society and the nation. In particular, for a high-skilled but young state like Uttarakhand, higher educational institutions were required to do many important tasks. Uttarakhand had its own distinct geographical, social and cultural environment. By identifying this uniqueness, policies for overall development of women, youth and farmers here needed to be made. It was not necessary that one area-specific plan would be beneficial in another area. There was a greater need for sector-based policies. The universities had to focus their abilities on practical research. Development of affordable and accessible technologies related to renewable energy sources, including solar energy, was the need of the hour. This would also create new employment opportunities in this area. All the buildings in universities and colleges ought to have green technology.

Chief Minister Trivendra Singh Rawat announced a grant of Rs 5 crore for various development works of the University. Referring to the important role of teachers, he said with good teachers in any university or educational institution, even the lack of resources did not matter much. The University was honoured to confer the honorary doctorates on Dr Murli Manohar Joshi and Narendra Singh Negi. The government was committed to promoting regional languages and protecting the Himalayas. He expressed the hope that, in the future, Doon University would be among the best in the country.

Minister of State for Higher Education Dr Dhan Singh Rawat said the convocation ceremony would be organised regularly. The State Government was strictly implementing the education calendar. In the last academic session, against the schedule of 180 days, studies took place for 212 days in Doon University. He said that, every year, five eminent persons would be conferred honorary degree by state universities.

MP Dr Murli Manohar Joshi, while receiving the honorary degree, said that Doon University ought to contribute to the creation of an eco-friendly policy that promotes environmental protection. Explaining the importance of the Himalayas, he laid emphasis on the need for thorough research on the Himalayan economy and ecology. He said that conservation of the Himalayas and its water resources were a priority. Dr Joshi stressed on the need to study Sanskrit and research its Granths.

Folk singer Narendra Singh Negi said that he had worked to bring honour to the folk languages of Uttarakhand. He called for protection of Sanskrit and all regional languages, including Garhwali and Kumaoni.