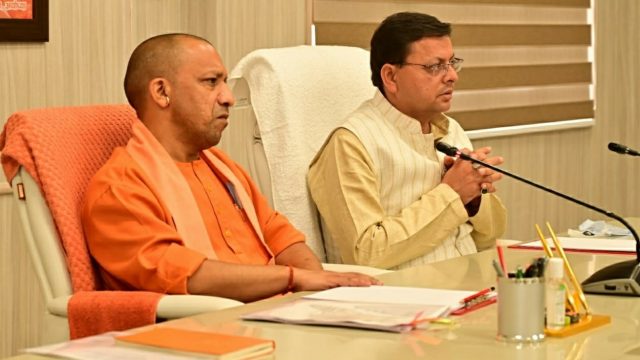 Dehradun, 18 Nov: Chief Minister Pushkar Singh Dhami, who was in Lucknow, today, called on Chief Minister of Uttar Pradesh (UP) Yogi Adityanath and the two leaders discussed several issues still pending between the two states, in particular the transfer of assets and liabilities still pending since the formation of Uttarakhand as a separate state in November 2000. According to official sources, the discussions were held keeping in view the mutual interests of both states.
In one of the important decisions taken during the meeting, it was agreed that the Alaknanda Tourist Resort in Haridwar would be inaugurated in December this year and, then, would be transferred to Uttarakhand. It may be recalled that Alaknanda Tourist Resort, located in Haridwar, has been in UP’s possession as it was very reluctant to transfer the ownership of the government accommodation to Uttarakhand.
In addition, it was also decided that the land of the Uttar Pradesh Irrigation Department’s bus stand in Kichha (District Udham Singh Nagar) would also be transferred to Uttarakhand within 15 days. The payment of the pending bills of Rs 90 crores of the Forest Department due to Uttarakhand would also be done by the UP Government immediately.
The UP Government also granted permission for tourism and water sports in Dhaura, Baigul and Nanak Sagar reservoirs located in Udham Singh Nagar district. Water sports will also be allowed in the Upper Ganga Canal. In yet another important decision, Uttar Pradesh Transport Corporation agreed to pay Rs 205 crores to Uttarakhand Transport Corporation as part of transfer of assets and liabilities between the two Corporations after the division of the state. It was also decided that the income and liabilities arising from the disposal of the assets of Uttar Pradesh Housing and Development Council located in Uttarakhand would also be divided in the ratio of 50-50 between the two states.
The meeting was stated by the officials of Uttarakhand Government to be very fruitful and it was claimed that the cases which were pending for 21 years were resolved during this meeting. In some cases, 15 days time was sought by the UP Government for a final decision and it was agreed that these issues would be settled through a joint survey by the officials of both the states.
In one such case, it was decided at the meeting that identification of 5700 hectares of the Irrigation Department land and 1700 houses would be done soon after conducting a joint survey to assess the actual requirement of land and buildings for the use of the Uttar Pradesh Irrigation Department. Another important decision taken during the meeting was that various cases pending in the courts relating to transfer of assets and liabilities between the two states would be withdrawn and the issues resolved by mutual consent. It was further agreed that the two barrages, namely the Banbasa Barrage on the Indo-Nepal border, and Kichha Barrage, which are in dilapidated condition due to disaster damage, would be re-constructed by the Uttar Pradesh Irrigation Department.
Expressing gratitude to the Chief Minister of Uttar Pradesh, Yogi Adityanath, on behalf of the people of Uttarakhand, Chief Minister Dhami said that all the demands had been accepted by the UP CM, which had been pending for 21 years. All matters would be settled soon. The Chief Minister said that both the states of Uttar Pradesh and Uttarakhand were siblings.
On this occasion, Cabinet Minister Swami Yatishwaranand, Chief Secretary of Uttarakhand Dr SS Sandhu, Chief Secretary of Uttar Pradesh RK Tiwari, Secretary from Uttarakhand Ranjit Sinha, Chief Engineer, Irrigation, Mukesh Mohan and senior officers of Uttar Pradesh Government were among those present on the occasion.