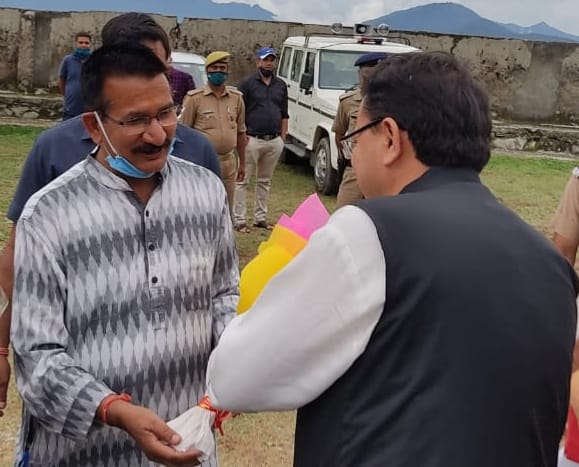 New Tehri, 11 Sept: Chief Minister Pushkar Singh Dhami on Saturday visited New Tehri for the very first time after his becoming the eleventh Chief Minister of Uttarakhand. On his visit to New Tehri Bhaghirathipuram, the former Tehri Garhwal MLA and minister and also former Uttarakhand Congress chief Kishore Upadhyay, urged him to revoke the previous decision by approaching the High Court, with written assurances of strictly adhering to Covid 19 epidemic protocols and request to open the Char Dham Yatra, which has adversely affected thousands of inhabitants of Tehri Garhwal, putting their survival at state including hurting the religious sentiments of pilgrims and tourists intending to visit Uttarakhand, to pay their obeisance to Lord Kedarnath, Badrinath and Gangotri and Yamunotri.

While welcoming Pushkar Singh Dhami with open arms, Vanadhikar Andolan founding patron Upadhyay submitted him a 19 point memorandum raising several important issues and their subsequent resolution. Apart from the first demand of opening of Char Dham portals, Upadhyay demanded revocation of the orders Sridev Suman Vishwavidhyalaya terminating the devices of its employees, requesting for their reemployment with retrospective effect.

In addition to these demands he also demanded declaration of Uttarakhandis as forest dwellers including bringing the stare under jurisdiction of an IBC state including free delivery of domestic gas, water and electricity to the state consumers followed by a monetary compensation of Rs 25 lakhs to the bereaved families of those killed by man eaters n wild animals with a govt job to next of the king. He also demanded among other demands withdrawal of all the court cases against the Tehri Dam evacuees compounded with re allotment of new shops to the owners of Koti Colony Bazaar shops which are in extremely dilapidated conditions, etc.

He also mentioned several problems related to the Tehri Dam evacuees and those of UPNAL employees requesting for allotment of housing facilities at the earliest. Kishore Upadhyay also demanded immediate implementation of grade pay of the Uttarakhand police as well as the Prison police and employees. In the context of excessive rent/fare imposed on the Boat owners of Tehri Lake @Rs 60000, Kishore Upadhya requested to decrease it from the present rate to lesser amount giving relief to the boat owners.

Elaborating on the grievance of the Tehri inhabitants the memorandum stated that the land assessment of the Tehri Dam has nit been done till yet and permission have been granted to enhance the level of Tehri Dam, which is completely unjustifiable and cheating with the affected inhabitants. Our demand is that as dine earlier, every affected family of Tehri Dam be sanctioned two acre agricultural land along with a house each and incase the said land is not alloted, they should be given a financial compensation of Rs 5 crore to each affected family.

Garhwal Post has established itself as a credible, balanced and forward looking newspaper in India. Based in Uttarakhand, the daily is read by the aware, socially and culturally responsible, high-income elite of society.
Contact us: info@garhwalpost.in
https://garhwalpost.in/reliable-dating-apps-for-relationship/ https://garhwalpost.in/meeting-men-online/