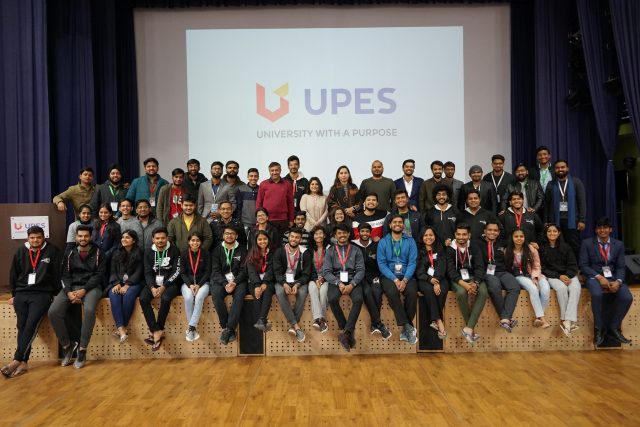 Dehradun, 6 Feb: The Fourth Edition of the annual Hackathon organised by the students’ chapter of CSI in UPES concluded successfully at its Bidholi campus. This event is an initiative, which the School of Computer Science (SCS), UPES, has been undertaking for the last four years. ‘Hackathon 4.0’ was organised under the mentorship of Shubhi Sharma, Assistant Professor in School of Computer Science Engineering and the Coordinator of the student CSI chapter.
She stated that this event provided a platform to the energised young students of computer science engineering to identify real life problems and to think, design and develop innovative solutions for them. The competition exposed students to an environment, which is optimal for exploring new techniques for problem solving and is an ultimate test of their Coding skills, Patience and Resilience that continues non-stop for 48 hours to discover the ultimate champion. Some of the themes under which problem statements were given to the participants included ‘Cyber Terrorism’, ‘Challenges in Rural India’, ‘Challenges in Retail Sector’ and ‘Health & Biomedical Devices’ apart from others.
Speaking about the ‘Computer Society of India’, Arun Dhand, Senior Director, UPES, shared that CSI was formed 55 years ago in the year 1965 with the main objective of guiding the Indian IT Industry, which was in its nascent stages then. Over these last five and a half decades, CSI has continued to grow and progress towards its objectives. CSI now has 72 chapters of practicing professionals located at various locations of India. It also has 488 student chapters in various Universities and Colleges across the country. These student chapters have been categorised into 7 regions. Uttarakhand student CSI chapters fall in Region -1 along with the states of Uttar Pradesh, Himachal Pradesh, Punjab, Delhi , Haryana and the two Union territories of Jammu ( J&K) and Srinagar (J&K). The UPES-CSI chapter was established ten years back and has won several accolades.
The format of this competition is based on the process of elimination spread over several rounds, which are conducted non-stop for 48 hours. Cash prizes were given to all the winners. The first prize of Rs 25,000 was claimed by the team comprising Abhishek Gupta, Pushkar Jain, Siddharth Rathore and Naveen Ramesh. The second prize of Rs 20,000 was bagged by the team comprising Bhuwan Chandra and Devansh Messon, while the third prize of Rs 15,000 went to the team comprising Animesh Chaturvedi, Aadhav Vijnesh, Aryan Rastogi and Aman Gaharwar. A special prize of Rs 10,000, called the ‘Unique Idea’ prize, was claimed by the team comprising Akanksha Bansiya Akash Sain. The judges’ panel of industry experts from PwC, Dell, Xebia, Nineleaps and Postman included Sujay Venaik, Karan Raheja, Bharath Kadaluri, Varun Bawa, Pranjal, Mudit Srivastav and Amogh Paranjpe.
Shubhi Sharma was supported by her colleagues Rahul Kumar Singh and Sughanda Sharma, along with the final year student team comprising Arun Parmar, Gargi Sharma, Naveen Govindrasu, Sarthak Taneja, Bhaskar Gupta, Aditya Pudipedi, Prakrit Shisodhia in addition to the core committee members of UPES – CSI student chapter and their Heads.