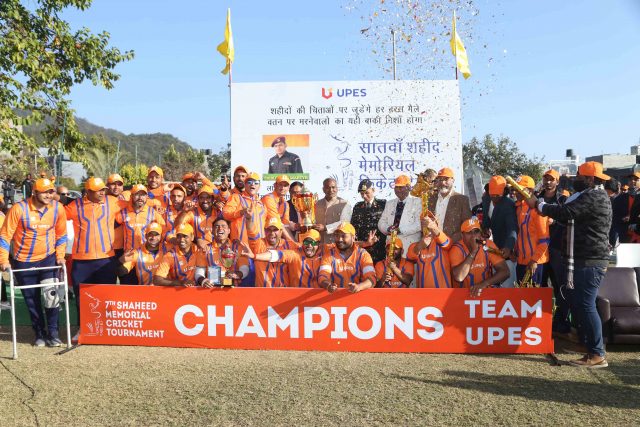 By Our Staff Reporter
Dehradun, 13 Jan: The 7th edition of the annual Shaheed Memorial Cricket Tournament hosted by UPES to pay tribute to the martyrs of the Indian Armed Forces and financially support their families, concluded on Tuesday.
Commencing on 17 December, 2020, the tournament was organised to remember and support the family of Lance Naik Pradeep Rawat of 4th Garhwal Rifles, who lost his life fighting for the nation in Uri in 2018. He hailed from Bagi Bamund village in Chamba block of Garhwal district.
Chief Guest Arvind Pandey, Cabinet Minister for School Education, Adult Education, Sanskrit Education, Sports, Youth Welfare, Panchayati Raj, and Guest of Honour Maj General Rajendra Singh Thakur were present at the UPES Bidholi campus to pay homage to the brave soldier and interacted with his family. A cheque for Rs 2,51,000 raised through the tournament was presented to the family of the brave soldier.
UPES is also starting Project NAMAN to extend more support to the families of martyrs hailing from Uttarakhand.
The final match of the tournament was played on Tuesday between UPES and UPCL teams. UPES won the match by 55 runs after setting a target of 191 runs for UPCL. Mohit Miyan of UPES was awarded the Best Batsman Award for scoring a total of 561 runs and Most Valuable Player of the Tournament Award for his all-round performance. Kiran Singh of UPCL was awarded the best bowler of the tournament for taking 17 wickets.
Paying tribute to Lance Naik Pradeep Rawat, Dr Sunil Rai, Vice Chancellor, UPES, said, “He was a valiant and courageous soldier who made the supreme sacrifice at the young age of 28 years for the nation. The Shaheed Memorial Tournament and Naman are small steps from our side to honour him and martyrs like him and help their dependents live better lives. Education and its power can make it possible in many ways”.
Through NAMAN UPES has pledged to: Fund the complete school education of one martyr’s children every year. Support the dependant of the martyr in finding job opportunities. Provide special training and development to the martyr’s widow under the existing women empowerment programme of UPES – ‘Shakti’. Offer full higher education scholarships to the children of five martyrs from Uttarakhand, every year.
Martyr Arvind Pandey said, “A martyr lives forever and today is the victory of martyrs like Pradeep Rawat. I congratulate UPES for a higher purpose initiative – Naman.”