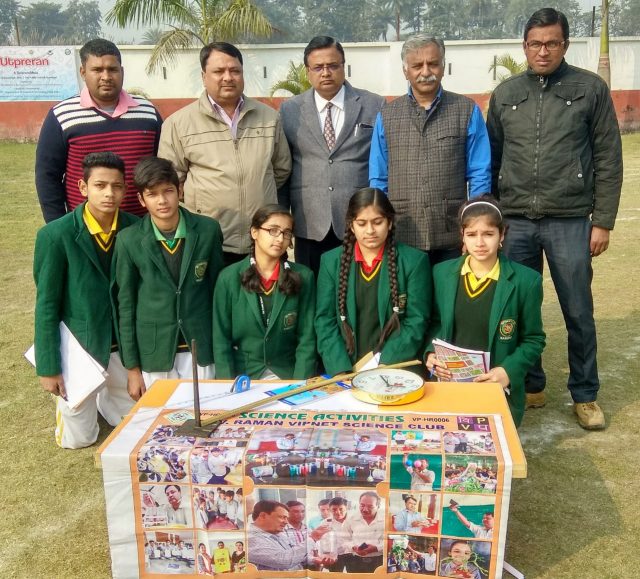 By OUR STAFF REPORTER
Kashipur, 23 Dec: A three day gala event in the form of a Science Mela – Utpreran – proved to be the first ever opportunity, here, for thousands of children to know science in a very simplistic way.
Organised by Society of Pollution and Environmental Conservation Scientists and supported by NCSTC, Department of Science and Technology, New Delhi, and Uttarakhand Council for Science and Technology, Dehradun, Utpreran was held in the sprawling campus of Sai Public School, Kashipur.
It marked the presence of a large number of government school students, who were witnessing a science mela for the first time in their lives. A large number of students from private schools also attended, with their teachers.
Science communicators at the Mela explained science and its day to day benefits for the common man to the students, thereby motivating them towards taking science as future career options. Stalls giving practical demonstrations on various facets of science saw a good footfall. Stalls on LED Bulb Making and Repairing, Weather Monitoring, Food Adulteration Tests, Low Cost Teaching Aids, Hydroponics, Paper Craft and Day Time Astronomy attracted a large number of students. Further, the presence of a ‘Taramandal’ – a makeshift Planetarium – was certainly a first experience for students to see what the night sky looks like. Om, who operated the show at the planetarium, said the children were visibly excited to see the model of the solar system, other stars and galaxies. A puppet show that communicated to the students the need for developing a scientific temper was also the cynosure of all eyes. Manmohan and Prabhat Kumar presented the show. Explanation of magic techniques by Yogesh Bhatt was another highlight of the fair. The Weather Monitoring stall that had all the latest weather monitoring instruments was manned by Balendu Joshi, who apprised the students on how to measure wind speed, quantity of rain and temperature. Similarly, Naresh Chandra Uprety in his food adulteration stall informed the students about simple household techniques to check impurity in their day to day food items. A well known science communicator, Darshan Lal, informed both teachers and students about low cost teaching aids. Ramteerath of SPECS told the students about low cost LED bulb making and repair. He said it was an indigenous technique developed by SPECS, which prevented the LED bulb from getting frequently fused due to voltage fluctuations.
Display of various drones by Jai Sharma and his team of JOY, which included Yuvraj Rawat, Danny and Akash, was also greatly liked by the students. Students also for the first time got an opportunity to handle and fly drones within the fair campus.
More importantly, 22 December was also the shortest day and the Science Mela gave students the opportunity to learn the technique of measuring the length of day on Earth, making the mela more significant.
Arvind Srivastava, Principal, Sai Public School, who was also bestowed the Science Excellence Award on the occasion, proposed the vote of thanks. Shailja Gahtori, MD, Sai Public School, and Shashank Gahtori member, Sai Public School Management Board, also praised the efforts of SPECS towards promotion of science.
Dr Brijmoham Sharma, Secretary, SPECS asserted that the society was committed to the promotion of science and has been specially organising Science Melas in far flung areas. Government Girls High School, Dhaboram, Mustakan, Kashipur, Kisan Inter College, Government Inter College, Pratap, were prominent among government schools, whose students visited the Science Mela in big numbers. An estimated seven thousand students visited the fair.