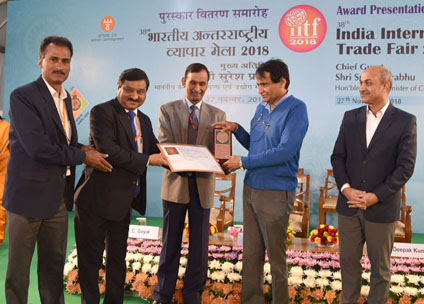 Dehradun, 27 Nov; Uttarakhand has been rated among the best states at the 38th India International Trade Fair held at Pragati Maidan, New Delhi. The theme of this year’s event was Rural MSMEs based on which the products were displayed at the fair.

In this event, the Kedarnath reconstruction works were displayed prominently at the Uttarakhand Pavilion. Apart from this, the Home Stay Scheme of the Department of Tourism and ‘nutraceutical’ products based on mountain grains of the Department of Horticulture and Food Processing were displayed, which were appreciated by the jury. The possibilities of Ayush and Wellness in the state were also exhibited. Handloom and handicrafts were also on show. These products are being marketed under the Himadri brand. Organic honey was also an item that was in demand. The opportunities available in the field of film shooting in Uttarakhand were also highlighted.

Information was made available about the Investors’ Summit held in October and focus areas identified for investment, which included manufacturing, tourism, hospitality, infrastructure, film shooting, IT/Biotech, agriculture and food processing, health and welfare, education and skills. The jury gave it importance also in its evaluation. Bihar and Himachal Pradesh were also awarded along with Uttarakhand this year.

At the concluding programmer, Union Minister of Commerce and Industry Suresh Prabhu distributed the awards. The award for Uttarakhand was received by Director, Industries, Sudhir Chandra Nautiyal.

Garhwal Post has established itself as a credible, balanced and forward looking newspaper in India. Based in Uttarakhand, the daily is read by the aware, socially and culturally responsible, high-income elite of society.
Contact us: info@garhwalpost.in
vegan dating app canada https://garhwalpost.in/the-best-dating-sites-for-relationships/ free ts dating sites