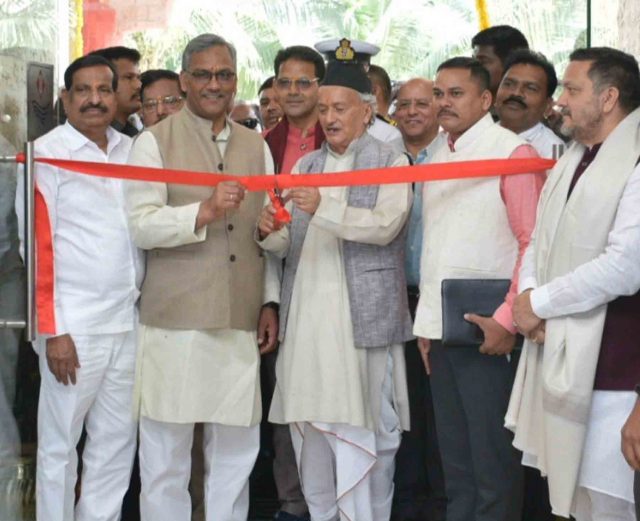 MUMBAI, 15 Jan: Maharashtra Governor Bhagat Singh Koshyari and Uttarakhand Chief Minister TS Rawat together inaugurated the ‘Uttarakhand Bhavan’, here, today. It will serve as the state guest house and emporium. Governor Koshyari congratulated the people of Uttarakhand on the occasion, and also extended Makar Sankranti greetings. He declared that under the leadership of Prime Minister Narendra Modi, the nation was developing at a fast pace. Uttarakhand was working on becoming self-reliant through the efforts of CM Rawat. Connectivity was being improved through the all weather roads and air services. Being better connected to the villages would also boost the culture of the state. Nature’s bounties were also plentiful in the state. He also mentioned the similarities between the Marathi and Uttarakhandi languages, which would lead on to the two states coming even closer. Chief Minister TS Rawat expressed the hope that the Uttarakhand Bhavan would boost the state’s profile. It would keep its doors open for the residents of the state and others. Two rooms would be reserved for attendants of victims of cancer and other serious ailments. Products of the state would be marketed there. Office would be opened for Tourism and Industrial promotion. The state’s film friendly policies had led to over 200 movies and serials in various languages being shot there. The state had won ten awards for road and village connectivity. Electricity had been taken to every home in the state. The state was among the top three ODF states. The state’s rivers were also being revived. The Investor Summit had led to signing of 1.84 lakh crores worth of MoUs. Rs 18,000 crores worth of projects had been initiated, which would provide employment to 50,000 people. As many as 37 projects had begun on power generation from Chir Pine leaves. Adventure tourism was being encouraged, with 13 new destinations being developed. The border areas were being developed on priority basis, which would check migration. Australian merino sheep were also being introduced in the state. Present on the occasion were MoS Rekha Arya, MoS Dr Dhan Singh Rawat, local legislators Ganesh Naik, Manda Vijay Mhatre, Dehradun Mayor Sunil Uniyal ‘Gama’, NMMC Washi Mumbai Mayor JD Sutar, Secretary Arvind Singh Hayanki, DG, Information, Dr MS Bisht, Additional Secretary Pradeep Singh Rawat and a large number of local Uttarakhandis. 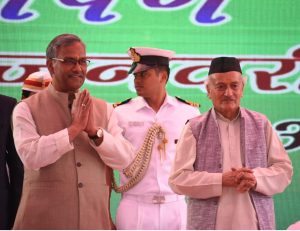