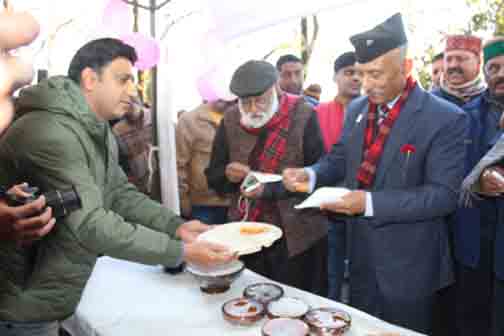 By Sunil Sonker
Mussoorie, 28 Dec: Tourists enjoyed traditional cuisine, such as ‘koda ki roti’ and ‘jhangora kheer’, ‘kandali ka sag’, ‘chaunsa’ and soup of ‘gaht daal’, the staple food of Garhwali people, on the Mall Road at the Uttarakhand Food Festival organised as part of the ongoing Mussoorie Winterline Carnival. The chefs and staff of various hotels participating in the festival served local delicacies to the tourists.
A stall purveying the native seeds of various dals and crops was also set up near GMVN, which was the main attraction for the tourists interested in organic food.
A puppet show was also performed on the occasion, which was the main attraction of the day.
The Uttarakhand Food Festival was jointly inaugurated by Padma Shri awardee Dr Pushpesh Pant and DGP Anil Raturi by cutting the ceremonial ribbon. Speaking to media persons, Dr Pushpesh Pant appreciated the effort being put in by the Uttarakhand Government for organising such programmes on promoting the culture and food of the state. He wanted such programmes to be organised from time to time.
DGP Anil Raturi also appreciated the work being done by the organising committee of the Carnival as it would lead to promotion of traditional cuisine and culture. It would help provide employment to local youths and also help farmers of the hilly areas, as their products would be in demand. Municipal Chairman Anuj Gupta said the state government was regularly trying to promote the cuisine and culture of the state. Now the food of Uttarakhand was also served to tourists from all over the world in various restaurants and hotels, which was a good sign. MD GMVN Jyoti Neeraj Khairwal said that, every year, a Garhwali food festival is being celebrated here to introduce it to the tourists coming here from all over the world. He said tourists in large number were participating in the festival.
Executive Chef Dev Chand Kumai told media persons that Uttarakhand food was simple to prepare, but was undeniably tasty. Full of diversity, colours and ingredients, Garhwali cuisine was medium spicy keeping in mind the hard-working nature of the locals and the harsh winters. He further said this was the reason they had a mixed food culture and equal varieties of vegetarian and non-vegetarian dishes. The traditional cuisine of Uttarakhand was highly nutritious and simple to prepare and, at the same time, appealing to the palate.
Present on the occasion were Uttarakhand Hotel Association President Sandeep Sahni, senior IAS officer Radha Ruturi, SDM Meenakshi Patwal, Darshan Rawat, Pratap Panwar, Jashoda Sharma, Jasbir Kaur, Arti Aggarwal, Nandlal, Pankaj Khatri, Executive Officer ML Shah and many others.