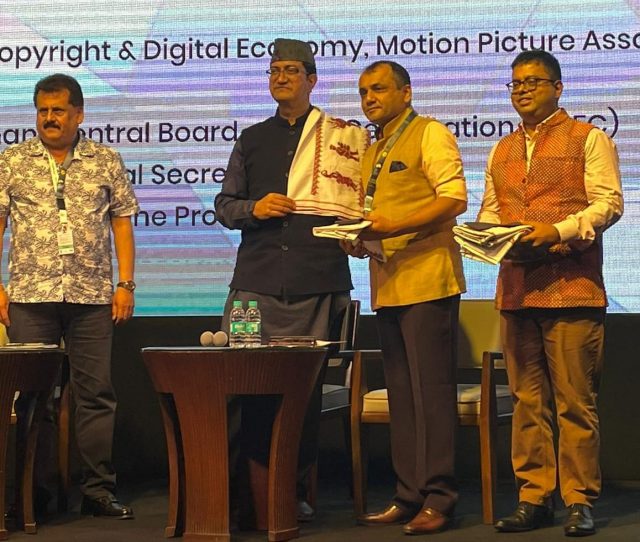 GOA, 22 Nov: The Knowledge Series was organised on Tuesday at the 53rd International Film Festival of India. In the Knowledge Series, there was a discussion about film shooting in Uttarakhand. On this occasion, Chairman, Central Film Certification Board, Prasoon Joshi, Pravesh Sahni, Founder, India Take One Production, Special Principal Secretary, Information, Uttarakhand, Abhinav Kumar were present.

As the keynote speaker, Prasoon Joshi said that there is a favourable environment for shooting of films in Uttarakhand. He said that, apart from giving direction to the youth in this field, cinematography, script writing as well as other film arts have to move forward. He added that, along with the filmmakers, it needs to be seen what the artists and others of Uttarakhand can contribute to the film industry. Joshi said that Uttarakhand CM Pushkar Singh Dhami is working to develop the state as a film destination. He emphasised that the music, art and culture of Uttarakhand have their specific qualities.

Pravesh Sahni, Founder, India Take One Production, said that all states will have to make more efforts to attract foreign filmmakers. There is a need to pay special attention to infrastructure in film production.

Special Principal Secretary, Information, Abhinav Kumar informed the gathering that a lot of amendments are being made in the film policy at the instructions of CM Pushkar Singh Dhami. The Chief Minister wants to link film production in Uttarakhand with the employment of youth. Work has begun on establishing a Film City. A letter has been written to the District Magistrates to find suitable land for the film city. All possible assistance is being provided to the filmmakers and directors. The government also has a special focus on promoting new film locations, regional films in the state and developing Film and Creative Art Institutes. He said that promoting film production in the regional dialects of Uttarakhand, including Garhwali and Kumaoni is the top priority.

Filmmakers present at the session asked many questions of Abhinav Kumar on film shooting and the policy in Uttarakhand. Some questions were also about permissions from the Forest Department regarding National Parks. Kumar provided details about the policy. Some questions were about the Film City and the local film institute. Answering all the questions, the Special Principal Secretary said that the government welcomes all positive suggestions.