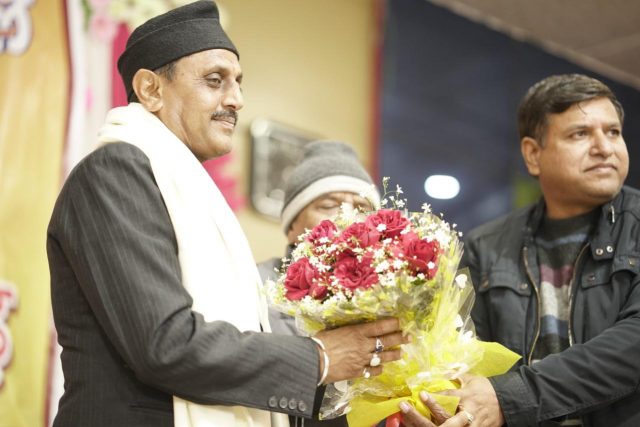 Dehradun, 31 Dec: Members of the Vaishya Mahasabha, Dehradun, Vaishya Society, Dehradun, and the Maharaja Agrasen Charitable Trust held a function at GMS Road, today, and declared support for the candidature of BJP leader Jogendra Pundir from Dehradun Cantonment Assembly constituency. On this occasion, Pundir was also weighed against coins of various denominations.
It may be recalled that the sudden demise of Harbans Kapoor, the incumbent MLA from Dehradun Cantt some days ago, has led to intense lobbying for the BJP ticket from this constituency. Pundir is a known face and has a strong base in the constituency. At today’s function, several leading organisations, including the Vaishya Samaj and office-bearers of the Traders’ Association, under the leadership of Shri Agrasen Charitable Trust, declared that they supported the candidature of Jogendra Singh Pundir from this seat.
Under the leadership of Sohan Lal Gupta and DC Bansal, a large number of persons from the Vaishya Samaj claimed that Pundir had been working on the ground for the Vaishya community. They also weighed Pundir in coins and demanded that he be given the BJP ticket from this constituency now. They claimed that Pundir was a capable leader who could take along all sections of society and ensure development of the constituency. Highlighting that Pundir had a great record as a social worker, they declared that, if given an opportunity to become a legislator from the area, he would be able to contribute even more to the constituency.
On the occasion, Jogendra Pundir said that his entire life was dedicated to the conservation and protection of Sanatan culture and to humanity. He also promised that he would sincerely and honestly work for the constituency and attempt to ensure rapid development. Among those present at the programme were also representatives of various organisations and included DC Bansal, Siddharth Umesh, Agarwal Yuva Morcha, Ram Gopal, Sohan Lal Gupta, Naveen Kumar Gupta of CA Association, Naresh Agarwal, Akhilesh Agarwal, Amarkant, Sandeep Khatri from Devbhoomi Bhairav Sena, Ajay Yadav from Yadav Mahasabha, Anurag Gaur, Bablu Bansal, Mandal President, Mandal General Secretary Captain Bhopal Chand and Shekhar Nautiyal. All of them declared their support for Pundir. Office bearers of Bhairav Sena, Shani Sena, Brahmin Mahasabha and Uttarakhand Yadav Mahasabha were also present on this occasion.