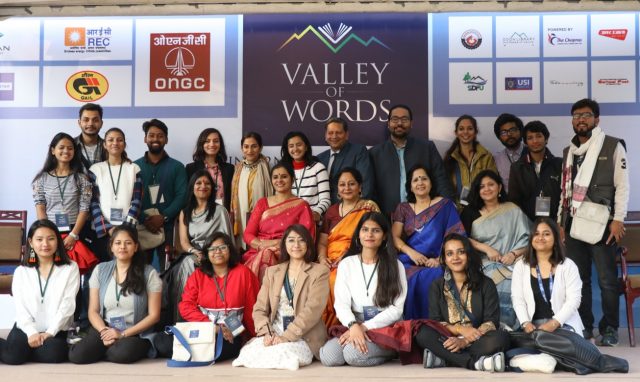 Dehradun, 27 Nov:  The three day second edition of Valley of Words concluded on a very high note here in Dehradun on Sunday evening. The event has carved a niche place for itself in the India’s Literary calendar and this edition attracted best of literary and artistic minds from across the country. The three day event was jam packed with very well attended and appreciated programmes which included debates, conversations and book launches, photo exhibitions and performing arts. Addressing the Valedictory function on Sunday afternoon, former MP and key speaker Tarun Vijay stated that he was happy to note that the festival attracted opinions from various states, across the gender, across the communities and across all political hues from left to Centre and Right of the Centre. That, he said was the best feature of this event.  He added that the event provided an opportunity for literary minds to openly discuss their opinions freely. Vijay further added that the awards also showed that selection was made from a very wide range of writing and writers of wide range of genres. Vijay added that it was interesting that Dehradun had been chosen to be the venue of this very interesting festival. He reminded that while Dehradun was the place known for Guru Dronacharya it also ought to be known as a place of Eklavya who proved that one could become the best without receiving any formal training. Dehradun ought to get out of curse that it deprived Eklavya of a formal training in since Eklavya became the best even without receiving formal training. He also claimed that Dehradun had all the hallmarks of being a great place for learning.

Thanking the organisers for the award for her book ‘Mishti, the Mirzapuri Labrador’, writer and journalist Gillian Wright noted that she was happy to note that Valley of Words was one such festival where literature meant for children and young readers was also being recognised. She said that there ought to be no segregation of festivals or events for children. She added that all other literature festivals ought to follow the suit. Jerry Pinto was also appreciated the festival and he said that he was happy to note that the society was finally becoming more sensitive and aware towards gender and sexuality issues. He added that some changes had come but more was needed to change. He was also happy to get the award for his book ‘Murder in Mahim’ at the Festival.

Author and former diplomat Rajiv Dogra was awarded for his book ‘Durand’s Curse: A Line Across the Pathan Heart’ under the category of English Non Fiction. This is the book about the arbitrary line of partition drawn by Mortimer Durand in 1893 on a small piece of paper and how it continues to bleed Afghanistan and hound the world.Dogra called it as one of the worst crimes committed by the British in the nineteenth century. That led to Pakistan taking away a good chunk of Afghan territory  though this division was never accepted by a large number of Pathans on both sides of the border. This also led to Talibanisation of the region, claimed Dogra and how a struggle continued still to rub out the cursed line drawn across the sand. Dogra was also happy to see that serious non fiction writing had been recognised at Valley of Words festival.

KK Goyanka who received award for his book on respected Hindi story teller Premchand noted that Premchand was one such author who had beautifully captured extraordinary struggles of common people of this country. He added that Premchand’s book had a great historical and cultural value and that it would be difficult to understand the lives and culture of common man of India without understanding Premchand in a proper perspective. One great quality of his literature was that it was written in a language that everyone could follow and understand, Goyanka emphasised.

Addressing the valedictory session, Dr PV Ramesh IAS, Chairman of REC (Rural Electrification Corporations Ltd) , one of the major sponsors of the event and sponsors of the awards, said that REC was very happy to support and acknowledge great contribution being made in the world of literature by way of awards. Appreciating the event, he further noted that REC was very keen to see that literature in translations was also well covered in literature festivals because the best work in the field of literature in the country was perhaps being done in regional languages had to get the importance they deserved. He also expressed happiness over the fact the Valley of Words Literature & Arts Festival gave equal importance to English as well as Hindi. It may be pertinent to point out here that from the next edition of the festival, REC has announced another award for best translation from Indian languages into English.

At the end, the organisers thanked the sponsors of the event, including Titan, Blue Star, Greenply, ONGC, and the attendees for their contribution to the successful showcase of the event.