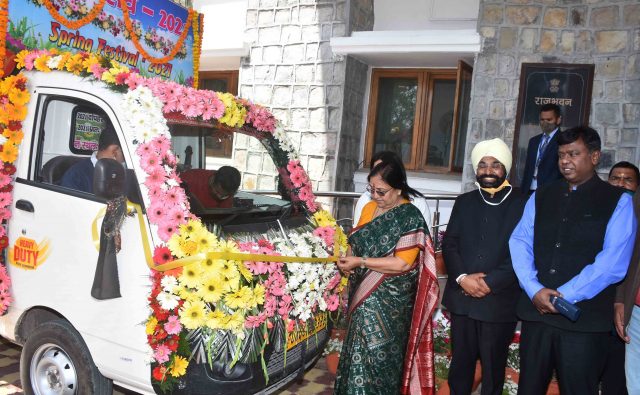 By Our Staff Reporter
Dehradun, 11 Mar: Governor Baby Rani Maurya announced today that the annual flower exhibition, ‘Vasantotsav’, will be held at the Raj Bhawan on 13 and 14 March.
In an interaction with the media, she said competitions will be held for flower growers in various categories. A Vrindavan ‘Phoolon ki Holi’ will also be organised. She also flagged off a ‘Pushp Rath’ that will publicise the event. She also revealed that an apple and lychee festival will be held in August-September to encourage fruit producers.
As it is also Mahashivratri, today, a flower Shiv Ling was also made at the Raj Bhawan and prayers offered to it.
The flower exhibition will be inaugurated on 13 March by the Governor at 9:30 a.m. and will be open to the public on both days till 6 p.m. The prize presentation will be held during the closing ceremony at 4 p.m. on 14 March.
Children will be especially invited to the exhibition a day before on 12 March. Children from the underprivileged sections and those with disabilities will be specially invited for the event.
She recalled that the exhibition began in 2013 and has evolved into a popular cultural and professional event. It could not be held last year because of the Covid-19 pandemic and, this year, all the protocols will be observed for everybody’s safety.
Present on the occasion were Secretary to the Governor Brijesh Sant, Secretary, Horticulture, Harbans Singh Chugh, Additional Secretary JK Sonker, Director, Horticulture, Dr HS Baweja and others.