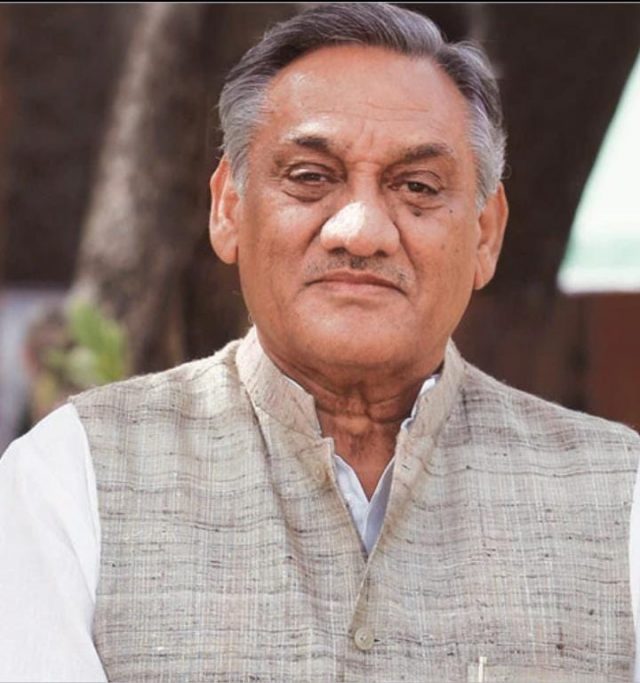 By Arun Pratap Singh
Dehradun, 27 Oct: Senior BJP leader and former Chief Minister Vijay Bahuguna, who was living a semi-retired political life in recent times, has again become active, this time to prevent defections from the party. At the request of the BJP High Command and the state BJP leadership, Bahuguna today landed in Doon from Delhi, his usual place of residence. Soon after, he was seen at the residence of Raipur MLA Umesh Sharma ‘Kau’, rumoured to be in touch with the Congress leadership and looking for an opportunity to return to that party. Bahuguna spent over an hour and a half with Kau at his residence.
Later, Bahuguna also called on Chief Minister Pushkar Singh Dhami at the latter’s official residence today. Both the leaders are understood to have discussed the upcoming assembly elections.
It may be noted that the BJP has sought to utilise the services of Bahuguna in the wake of the fact that certain BJP leaders, who had switched over to BJP from Congress in 2016, had done so under the leadership of Vijay Bahuguna. Umesh Sharma ‘Kau’ and Cabinet Minister Harak Singh Rawat and Cabinet Minister Subodh Uniyal are among those leaders. While, Uniyal, who is considered to be very close to Bahuguna is still believed to be firmly with the BJP, the party apprehends that Harak Singh and ‘Kau’ are wavering. Their recent statements as well actions have alarmed the BJP. Sources in the party admit that those who might have made up their mind could not be stopped from leaving but the leadership did not wish to create an impression that BJP was witnessing large scale defections. Therefore, while Bahuguna has been activated by the party, on the one hand, BJP State President Madan Kaushik has also become very active. He had, yesterday, summoned Harak Singh and another rebel party MLA Puran Singh Fartyal at his residence over lunch and is understood to have told them to be careful with their statements. Harak Singh after the meeting had claimed that he had no intention ‘at present’ to leave the BJP and join the Congress.
Meanwhile, today, in an informal chat with media persons, Bahuguna claimed that no one was leaving the BJP but there were many in Congress in touch with the BJP leadership to join the party. He also claimed that Congress would be soon further impoverished in respect of its leadership.