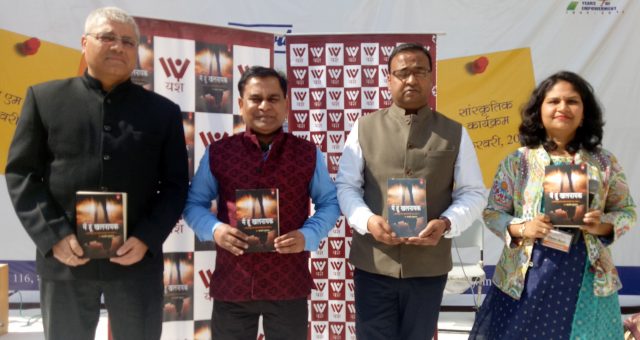 DEHRADUN, 11 Feb: In the history of Indian Cinema, Bollywood villains have entertained the audience for many years. It is the villains that have made the Heroes shine. The 100 golden years of Bollywood have seen legends playing negative roles with true dedication. In them, people do not just identify the cons of society, but also get to learn many new aspects of it. Pran, Amrish Puri, Prem Chopra, Amjad Khan, Ajit, Ranjit and many more have proved to be real gems, but the real conflict is: “Have we learnt anything from them?” Probably not!
Fazle Ghufran’s book, “Main Hoon Khalnayak – The Journey of Bollywood Villains” is an endeavour towards projecting real learning from these reel life villains. Senior Journalist Fazle Gufran’s book “Main Hoon Khalnayak” has been published by Yash Publications.
In an interaction with Fazle Ghufran held at the National Institute for the Visually Handicapped (NIVH), here, he said, “While stitching every page of this book, many new aspects of the life of a villain appeared in my mind and made me realise that every brain has its own interpretation of an antagonist or a protagonist. There are too many similarities and dissimilarities between these two as well. But the real dilemma lies in defining a villain and the parameters to define one. Analysing the100 golden years of Indian Cinema, we can describe the villain as someone who doesn’t abide by the ethics of an ideal society or by law. And hundreds of artists have played negative roles during these years in Indian cinema. Many actors like Prem Chopra, Pran, Gulshan Grover, etc., have dedicated their entire life to the industry playing a negative role. But have we ever learned anything from them or have they proved to be ideals for us? Realising the importance of a villain in the storyline is very important.
He points out that it is the villain who makes the
protagonist a real hero. Can you ever imagine Rama to be as
magnificent if Ravana was not there? This book on Bollywood Villains is just an endeavor to understand this effort of the “Bollywood Ke Khalnayak”.