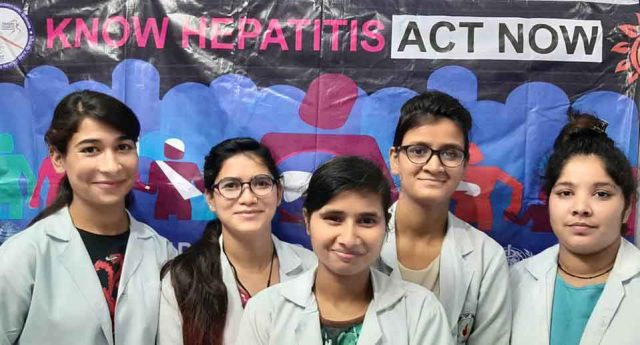 By Our Staff Reporter
Dehradun, 28 Jul: Sanjay Maternity Centre observed World Hepatitis Day here, today, to increase awareness and understanding of viral hepatitis as a major global health issue. The theme for this year’s World Hepatitis Day is “Find the Missing Millions”.
Globally, viral hepatitis is responsible for 1.4 million deaths every year (compared to 1.5 million deaths from HIV/AIDS and 1.2 million deaths from each of malaria and tuberculosis) and around 500 million people are currently living with viral hepatitis. In India, it is estimated that prevalence of hepatitis C infection is more than 6 times the prevalence of HIV infection. The World Health Organisation (WHO) has called HCV a “viral time bomb”, which signifies that the policy makers must pay the required attention towards this health issue.
Hepatitis B is an occupational hazard for health workers. Surgeon have ethical obligations to render care to the hepatitis infected patients and the same to other patients. The risk of transmission of HBV from patient to the surgeon is greater than that of surgeon to patient. High viral consultation indicates increased risk of transmission.
The actual risk of hepatitis B and C is many times more than the HIV infection in health care workers – 37.6% of HBV, 39% HCV and 4.4% of HIV in health care workers around the world are due to needle stick injury. A study by a French surgeon estimated that general surgeon has a 6.9% life time risk of contracting HCV and 0.15% life time risk of contracting HIV.
Dr Sujata Sanjay, obstetrician and gynecologist, disclosed that the jaundice outbreak was a man-made problem. It could be prevented only by early detection of the source of contamination and monitoring of drinking water on a day-to-day basis.
Dr Sujata clarified that it spread from the consumption of faecal-contaminated water caused by sewage flow, open defecation and from contaminated food items and not from a person-to-person contact. The virus was fatal for pregnant women with mortality rate as high as 75 per cent, she warned. There was no vaccine but only symptomatic treatment of hepatitis E and A, she said. The virus remains dormant for six months as it can survive on the organic material in water supply sources.
Dr Sujata says most persons suffering from viral hepatitis do not develop any obvious symptoms at the start but later on is complicated with serious liver problems like liver damage (cirrhosis), cancer and liver failures which need liver transplant.
She revealed that hepatitis B and C are transmitted through blood and sexual interaction while A and E are water- and food-borne diseases. “The prevalence of the disease is not negligible and everyone should be on the alert to protect themselves,” she added.
India has documented low awareness about viral hepatitis in community and amongst populations with high risk behaviour. The irony is that Hepatitis B has a vaccine, but no cure, while Hepatitis C has no vaccine, but does have a cure. Hepatitis C is also fairly common, with around one per cent of the population harbouring the virus without knowing it. “Most hepatitis cases are discovered during blood donation camps. Ignorance is the main reason for so many unreported cases” she added.