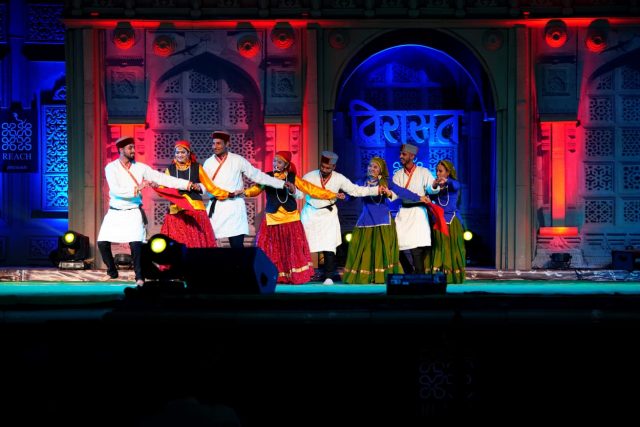 DEHRADUN, 11 Oct: Dating back to over a thousand years, the Chholiya Dance has its origins in the warring Khasiya Kingdom of Khasdesh, when marriages were performed at the point of the swords and it goes back to 10th century. Later they took on the customs of the Rajputs, who were themselves honorary Kshatriyas. Keeping the old tradition alive, the Rajputs perform this at their weddings as a part of the marriage procession itself, led by the male dancers who go on dancing till they reach the bride’s house. Performed by the Rajputs with sword and shield in pairs, the drummers are usually called Dholies. The Turi and Ransinga are typical Kumaon instruments. Sparsh Janjati Samajik aivam Sanskritik Sanstha, Chakrata, under the able guidence of Bhagat Singh Rana performed the folk dance form called Choliya. The inaugural dance was the prayer to Mahasu Devta.The prayer was accompanied by the beating of Damau, Dhol and the sounds of Rannsingha. Next they performed Taandi, a dance celebrating weddings and festivals. Beautifully traditionally dressed attired couples heralded the Virasat festival open. The high light of today’s program was the Mohan Veeena and Satvik Veena Jugalbandi by the father son duo, Grammy winner, Padma Bhushan Pt.Vishwa Mohan Bhatt and his son, Salil Bhatt. The foremost disciple of Pt. Ravi Shankar. Vishwa Mohan Bhatt has attracted international attention by his successful indianisation of the western Hawaiian guitar with his perfect assimilation of sitar, sarod & veena techniques, by giving it an evolutionary design & shape and by adding 14 more strings helping him to establish the instrument Mohan Veena to unbelievable heights. With blinding speed and faultless legato, Bhatt is undoubtedly one of the most expressive, versatile and greatest slide player s in the world. Bhatt started the program with the new raag called Vishwaranjani, composed by Pandit ji himself. It is a combination of Carnatic and Hindustani music, giving the message that music cannot be discriminated by region. Next he played the composition from his Grammy winner album ‘A meeting by the river….’; then he played a dhun in Bhopali Pahadi. The program was enjoyed by the spectators hugely. The city of Doon has been waiting very expectantly for the Virasat to commence. Pt.Vishwa Mohan Bhatt was accompanied on Tabla by Himanshu Mahant, a Maestro Bismillah Khan award winner for his exemplary career.