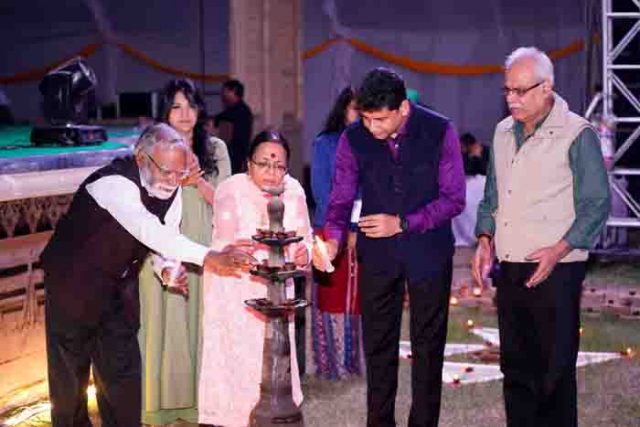 DEHRADUN, 25 Oct: On the last day of Virasat, Shashi Shankar, Chairman, ONGC Group of Companies, was awarded the ‘Virasat Samman’, here, today. On his behalf, the award was received by Preeta Pant Vyas, who is Head, Corporate Administration, ONGC, Dehradun. Virasat the fortnight-long festival of Art and Culture has been sponsored by ONGC for the last many years along with its sister companies. Raghu Dixit performed today with his Band members Naresh Nathan on Bass, Joe Jacob on Drum, John Paul on Guitar and Benjo and Akshay Ganesh on Violin. The music was an amalgamation of folk music from different corners and a taste of music they have collected together while traveling to many places. Raghu a personality with calculative randomness believes in “go with the flow” and suggests that if one needs to find answer out of randomness than has to be fearless and live to the best of the moments in life. He also shares the Album which was literally inspired with the way he lives his life – ‘Patta’, which he describes as a leaf in the wind that has no acknowledgment of directions and has no memory. They played for the first time in Dehradun. They played songs from their new album which yet has to be released.