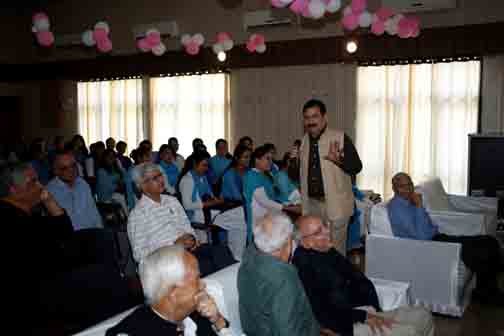 DEHRADUN, 24 Oct: Craft Workshops were held with Master Craftsmen at the Virasat Fest, here, today. Whizzkid International School students from Haridwar came and participated in the workshop that involved bangle making, kite making, tie and dye, chocolate making, stone art, tribal tattoo making, etc. Also, at the ONGC Officers’ Club, an interesting presentation was made by Musicologist KL Pandey on ‘The Journey of Hindi Film Music from 1931 to 2019 with a Classical Viewpoint’. It was an interactive Audio – Video presentation with live singing. The audience participated with enthusiasm. Pandey is a retired Railway Board Member and has served in a number of key positions in the government. He is also a poet, an author and a musicologist. He has written a number of books on poetry, Hindi literature and Hindi film music including the “Hindi Cine Raag Encyclopedia” in which 174 Raagas in over 17000 songs have been identified from over 5700 films between 1931 and 2019. He educated the audience about the use of ragas in Indian cinema, which kept changing with films and composers. “In the ’30s and ’40s, there was extensive use of Raag Kafi and Khamaj as these correspond to serious moods of mythological films. You won’t see a lot of sweet-sounding ragas such as Bhairavi and Pahadi. They appeared in the ’50s and ’60s,” says Pande, who met many composers during his research. He also had sessions with instrumentalists to figure out ragas by putting notations in place and then analysing them. To learn more about this topic he began collecting 78rpm records, followed by tapes in the ’80s and ’90s. Pande’s postings to Bareilly, Vadodara and Kolkata as a railway official helped. Pande’s bilingual book documents that canorous Pahadi is the most popular raaga used in Hindi film songs, though it is contested by puritans for not being a raga and just a structure of notes. The raag appears in 3,176 songs, followed by Khamaj (2,570), Nat Bhairavi (1,939), Kaafi (1,752), Bhairavi (1,504) and Peelu (889). The evening witnessed a folk performance from Nagaland. Nagaland has multiple tribes, each having their own uniqueness, dance forms, cultures, language and more. The major folk dances of Nagaland include Modse, Agurshikukula, Butterfly Dance, Aaluyattu, Sadal Kekai, Changai Dance, Kuki Dance, Leshalaptu, Khamba Lim, Mayur Dance, Monyoasho, Rengma, Seecha and Kukui Kucho, Shankai and Moyashai, etc. There was also a performance of Pandavani by Ritu Verma. She was born on 10 June, 1979, in Rooabandha. Ritu Verma gave her first show on a foreign platform in August 1989. At the age of just ten, Ritu achieved the distinction that rare artists receive by performing in Japan. Since then she has been going abroad constantly. In 1991, the Tribal Folk Arts Council, Bhopal, sent her to Germany and England. When Ritu was five, her father gave her a tambura toy to play with. Ritu used to sing Pandvani in front of her house in the evening. The old people of Rooabandha Township used to come there.