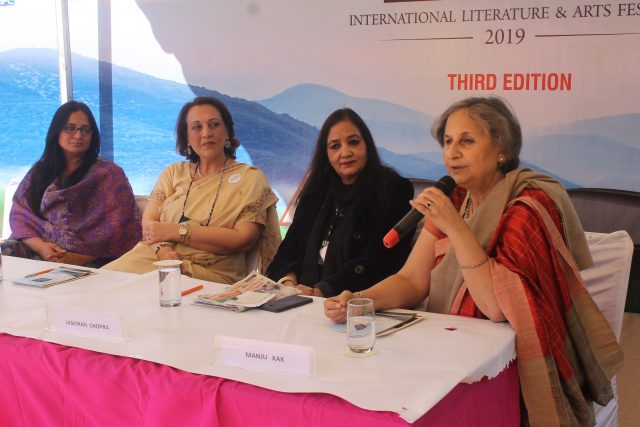 DEHRADUN, 16 Nov: Three eminent writers –Dr. Manju Kak, Dr. Venu Sanon and Dr. Ekta Uniyal- spoke at length about their writing and the inspirational role that the Uttarakhand Himalayas had played in their lives and work. The session was moderated by author and journalist Dr. Jaskiran Chopra who highlighted the manner in which all three authors have been influenced by the Himalayan region. Dr. Manju Kak, who now lives in Ranikhet, is a short story writer, an art historian and critic. Her latest book on Kumaon (In the Shadow of the Devi: Kumaon) projects various shades and moods of Kumaon and looks at it through the prism of wood craft. She said that wood had always fascinated her and the way in which this craft prevails in Kumaon made her go deep into the subject and research on it. Dr. Sanon talked about her book, At The Brewery Cottage, which is a personalized narrative about her three decades of living at The Rickvan’s Ridge which was earlier the Brewery Cottage in Balowganj area of Mussoorie. Her experiences and anecdotes, with some friendly ghosts thrown in, make this first person narration warm and real, touching the hearts of the readers. Her rootedness in the region was taken up for discussion by Jaskiran Chopra who said that the kind of subjective writing Dr. Sanon did endeared her to readers at once. Dr. Ekta Uniyal spoke about her first novel The Mountain Girl which she said was autobiographical to quite an extent. “When I joined the Nanda Devi Raj Jaat Yatra in 2014, I was inspired to write this story against the backdrop of the Raj Jaat. “I have always loved the mountains and need them like I need oxygen. They move me to write, to meditate, to think deeply and create”. All the three authors expressed their deep attachment to the Himalayan landscapes and surroundings. Dr. Sanon said that her cottage in Barlowganj was her haven and heaven and wherever she went, she always longed to be back home at this wonderful place. “I always wanted to live in Mussoorie and my wish was fulfilled and I have been there for a long ,long time now!” Dr. Kak said that she studied at Nainital in a boarding school but at that time she was not aware of the ethos of “Pahad”. “Later I realized the importance of the region and its people. This is what was behind my research on the crafts and architecture of Kumaon”. The session brought out the essence of writing about nature and especially about hills and valleys of Himalaya.