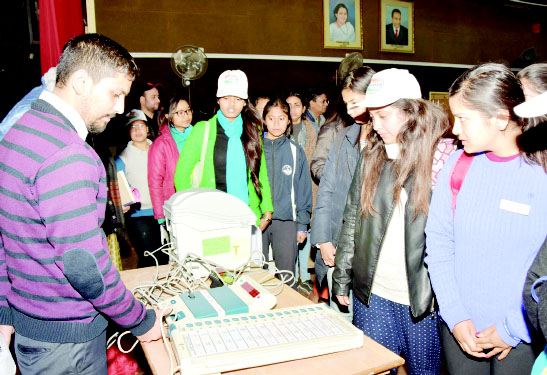 By OUR STAFF REPORTER
DEHRADUN, 1 Feb: Voter Helpline 1950 has been launched. On this toll free number, anyone can get the information that whether his/her name id is there in the voter list or not. If the name is not there, they can get it enrolled in the voter list. Apart from this, it is an Android phone, then from the Play Store, Voter Helpline app of the Election Commission of India can be downloaded and every sort of information can be obtained from it as well.
While launching the Voter Helpline 1950 in a programme organised in the Town Hall, Municipal Corporation, Dehradun, Chief Electoral Officer Sowjanya specially appealed to the young voters to get themselves enrolled in the voter list and also to exercise their right to franchise in the elections. She said that the aim of the Election Commission is that every possible effort is being made for the participation of everyone in the democracy and no voters should be left out. In the programme, she administered oath to a large number of students present to cast their vote and also motivate others for the same.
Additional Chief Electoral Officer Dr. V. Shanmugam gave detailed information about Voter Helpline. Establishing dialogue with the students, District Magistrate S.A.Murugesan motivated them to be a participant in the election process. Call can be made on the toll free number for getting Voter I-Card made, getting information related to the BLO and polling booth and to verify the name and details in the voter list. There will be no charges for calling 1950.
A live demo of the Voter Helpline was given in which a student named Lakshmi Kanojia, dialed 1950 and took the information about her name in the voter list. She was told about the Part Number, Assembly constituency and that her name is there in the voter list.
On the Spot Debate Competition on the subject ‘Strong Democracy – Participation of All’ was organised and prizes were awarded to Abha Vimol for securing first position, Swarnima Sajavan for second position and NIVH student Sagar Singh for third position, whereas consolation prize was awarded to Manju, Aksha and Dhanoop Kumar.
An impressive street play was presented on this occasion. With great enthusiasm, the students got information about the working of the EVM and VVPAT and also signed an Oath letter to cast vote.