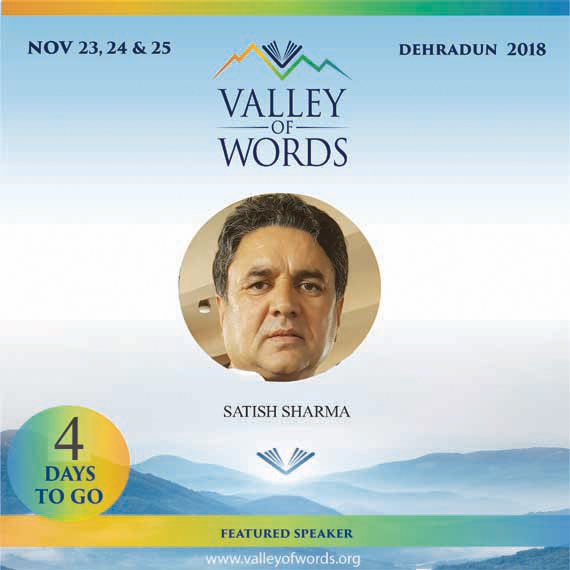 Satish Sharma is a second generation journalist whose journalistic journey began over two decades ago, when he interned with his father’s paper Hindi weekly ‘Doon Dwar’. Later, he studied journalism at The International Institute of Journalism, Berlin in Germany and started his own publication ‘Garhwal Post’. The newspaper is today in its 23rd year of publication and stands tall as an authentic voice of the people of Uttarakhand.
Q1) Garhwal Post has established itself as a pioneering newspaper of Uttarakhand. How has been the journey?
The journey has been difficult, but very exciting. It’s like giving birth to a child each day of the calender. There have been hardships and bottlenecks but the overpowering feeling has been of courage and resilience and conviction of purpose, in the face of any and every stumbling block and impediment. In the end when we have the  finished product in our hands there is a sense of elation and exhilaration and a feeling that is difficult to describe.
Q2) How has been your life as an Editor? What pulled you towards Journalism?
Life as an editor is quite challenging. Schedules may be cyclical and boring, but the final product makes us sing and dance always and every time. Mostly it’s a fast paced work that keeps you on your toes and if you wish to maintain your credibility then the challenge only gets bigger. There are conflicts of interest that need to be resolved, but what keeps you going is your sense of pride in your work.
Q3) You have also acted in various TV channels and movies. Please elaborate.
Movies are a happy development in my life. I began by promoting Uttarakhand as a filming destination in India and abroad through my initiative Enchanting Himalaya. I did this for years and I was the first to do it. I then gradually gravitated towards Line Production and Acting and after almost 12 films my love for acting has solidified. It was fun doing a cameo with Salman Khan in ‘Sultan’. I have so far essayed roles mainly as a politician. My next big release is ‘Firkie’ with Jackie Shroff, Neil Nitin Mukesh, KK Menon and others. It is slated for release in April 2019. I recently shot for a south Indian film that will release in three languages.
Q4) What do you enjoy more: acting or journalism?
Journalism will always remain my passion and priority. I am blessed to have been introduced to acting which, will now remain my chief preoccupation now. Television and commercials too I have loved doing.
Q5) What do you think is the need of Garhwal Post?
The daily Garhwal Post has added a substantial new dimension to the style of journalism that the weekly Garhwal Post represented for over a decade. It belongs to a region that has suffered neglect in various ways. The creation of a separate state was an acknowledgement of these difficulties. As such, apart from functioning as a vehicle for news, Garhwal Post has the responsibility of helping create an environment that leads to development, employment generation and social awareness. As a regional newspaper of considerable influence it is playing its role in combating the backwardness of  Uttarakhand Himalaya.
Q6) How do you target the young population?
It is fast expanding its footprint across a growing readership, particularly of young people. It is truly on the way to becoming the newspaper ‘For Tomorrow’s People’.
Q7) How has been the journey with Valley of Words?
It has been tremendous! As Media Partner with VoW we have run interviews for months on end, which is a record of sorts. These interviews have included the who’s who of the literary world and have been knowledgeable and have expressed the best qualities that human expression can achieve. I am sure these will work as an engine for creativity amongst aspiring writers. Their emphasis on imagination and heartfelt ideas have enriched countless minds.
Q8) What are your expectations from VoW this year? Which interview have you liked the most so far?
I am certain that VoW 2018 will exceed all our expectations in all respects and grow from strength to strength with each passing year.
All interviews have been  exceptional and have greatly enriched our world.