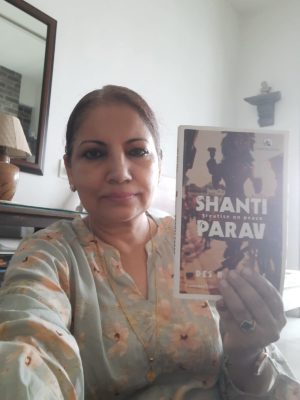 Shanti Parav, a Punjabi dalit-novel by Des Raj Kali, was translated by me and published by Orient BlackSwan in March 2020. The novel has now been shortlisted by the Valley of Words Jury of 2021 in the category of ‘English Translation’. My novel offers Des Raj Kali’s rebuttal to ‘Shanti Parva’ – the twelfth book of the Mahabharata, which claims to be a treatise on peace but ends up justifying state violence and organised terrorism.

Standing in the shadows of its epic namesake, the novel Shanti Parav methodically maps and subverts the peace-claims of the epic treatise. Through the employment of strategic structures and through the polyphonic patterning of fiction, non-fiction, discourse and narrative technique, Kali spins a narrative around the day-to-day adventures of the dalit protagonist – a journalist who struggles each day to bridge the dark distance between his dalit past and surroundings with the curse of knowing that education and his profession have bestowed upon him.

Running parallel to the journalist’s saga in the underbelly are three monologues delivered by three dalit rebels – a poet, a professor and a political leader – providing deep meditations on the nature of violence, the dynamics of state funded violence and the circulation of wealth in the power lobbies of privilege.

The hundred-odd-paged novel experiments with layout and page space to provide the reader with a refreshingly unique and multilayered reading experience. Straddling chapters of dalit narratives in the top half of page-space, along with three desi-style monologues running in the lower half of each page, the novel packs a refreshingly neat and disturbing punch.

The anti-aesthetic world of the Dalits – literate and illiterate, is celebrated unapologetically and unselfconsciously. As the pages unfold, they open before us a poignant world of ailing, misshapen humans – poverty stricken and burdened, and yet quite free in their emotion and humanity. It is a Bakhtinian world where signification is richly dispersed, and the tenor is carnivalesque, anti-novel almost, and deeply polyphonic.

Reading the novel in Doabi Punjabi took me to a space I had only envisioned sitting far away in Gujarat, or in brief flashes as a child during the lazy summer holidays spent luxuriating at my grandparents’. A relentless amount of research, creative improvisation and academic input has gone into the translation project. Translating the novel from the original Dalit Punjabi into English for audiences that presumably are more polished and located miles away from the harsh terrain of the caste based narratives of lack, illiteracy and prejudice, to carry the tenor of the indigenous into English readership, I evolved several translation strategies – creating in the process, new syntax, new word coinages and new rhythms in the English language. Certain desi words from the original text were retained and sometimes new sentences were induced imaginatively into the text…

The novel, I must confess, spoke to me from day one – all its madness spotted with pain, the priggishness of its characters and the hopeless profundity of its struggling dalit souls – the sounds and smells of the sentences… challenged me and I simply embraced it all!

It has been a privilege, being the first translator of Shanti Parav in English. Shanti Parav is a highly experimental work of fiction, I am convinced it will successfully make its way through the world of books and find for itself a proud place.

(Neeti Singh is an Associate Professor in the Department of English at The Maharaja Sayajirao University of Baroda.)