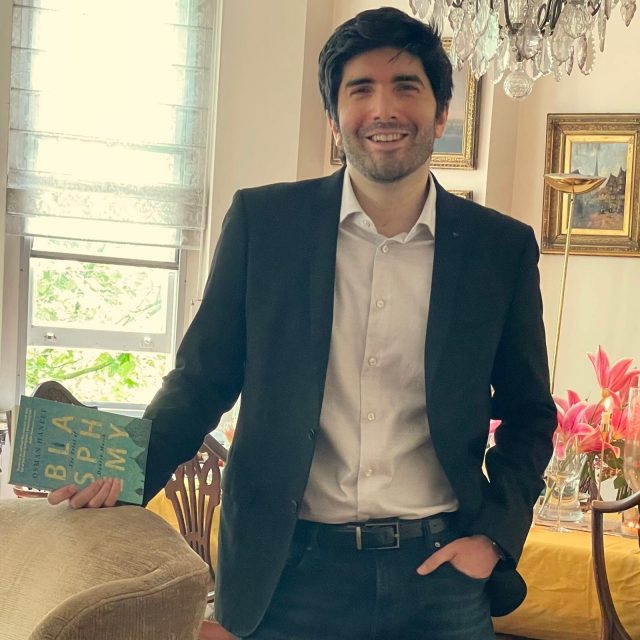 I have been asked to answer the question that all authors dread: where did I get the idea from?

I wrote my novel Blasphemy as a “discovery” writer. That is, I wrote the first draft without a strong sense of the narrative arc or central conflict. But, as I wrote, my mind kept coming back to a blasphemy case from the 1990s. In the case, the late human rights champion, Asma Jahangir, defended an illiterate teenage boy, Salamat Masih, who was accused of writing blasphemous statements on the wall of a mosque in a village in the Punjab. There was no physical evidence, and the judge was never told what was said because to repeat the statement would have been blasphemous. Eventually, the conviction was overturned, and Masih fled to Germany. However, the injustice of an obviously innocent young boy wrongfully convicted in this Kafkaesque court proceeding in Pakistan stayed with me.

When I tried to write, I couldn’t write about anything else.

But Blasphemy is not simply about an unjust law or how intolerance can poison a community if unchecked and allowed to grow. It is a tale of redemption, class, and love, and of particular characters and a city: Quetta. Although all the characters and events are fictional (or have been fictionalised), it is a deeply personal novel. Much of my lived experience ended up in the novel and informed the ideas behind the novel. My parents are from Balochistan, so many of my summers and holidays were spent in Quetta. The sense of the place I captured through those trips, the places I visited, and the people I met. I have seen the effects of dementia in people I know so I was able to capture it in my novel.

But ideas don’t simply leap into one’s mind, fully formed. I had to fill in gaps, and I researched almost every little thing that was outside my own experience. For example, what happens when your jaw breaks? I looked it up. I used research to help build a world and characters, which readers would accept as authentic.

For the courtroom scenes, I visited the courthouse in Quetta, and watched some of the proceedings. I spoke with human rights lawyers about their experiences in Pakistan. I read the records for different blasphemy cases. I then had experienced lawyers review certain facts and proceedings. A leading human rights lawyer in Pakistan actually commented that he had seen everything imaginable happen in a Pakistani courtroom. So I shouldn’t worry too much about credibility. Through research I was able to construct the story of the novel while grounding it in reality.

The reason that authors struggle to answer the question of the source of their ideas is that the act of writing sometimes feels closer to divination than invention. No one really knows where their ideas come from — they come from an author’s imagination informed by experience and research. That is how authors narrate lies that feel so true.

(Author Osman Haneef has been shortlisted by the Valley of Words 2021 under the ‘English Fiction Category’ for his book ‘Blasphemy.’)