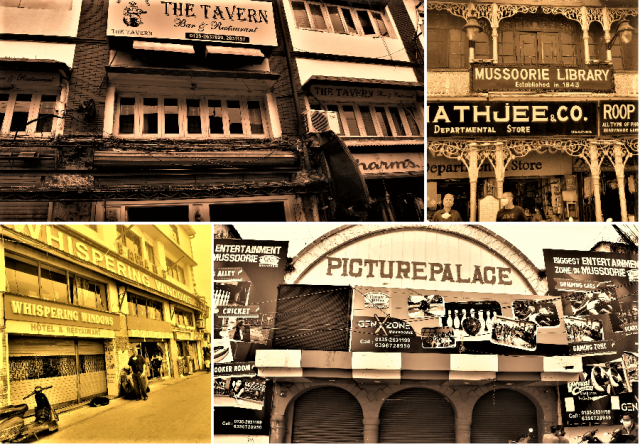 By Kulbhushan Kain
As I stood looking at the street, on my left stood the Tavern, old and silent. On my right stood Picture Palace – plastered with garishly coloured advertisements. I was on the Mall Road in Mussoorie. Many a time, I have walked this road – sometimes when it was shrouded in shades of grey, and the hills around it dusted with snow. It always gave me vicarious pleasure to walk on it, as the snow made crunchy sounds under my boots!

Mussoorie was established by Major Frederick Young in 1823. Few know that, as a city, Mussoorie has probably produced more writers than any single city in the WORLD.

For me – the memories of the town are very strong because I came repeatedly to it – many times walking to it via Jharipani to play cricket matches with our brother school, St George’s College in Barlowganj .

An interesting fact is that Mussoorie got electricity in 1909 -much before Delhi. Picture Palace (established in 1909), the landmark where I stood, proudly called itself “Electric Picture Palace” when it started operating – it was a big deal! Ah – the number of movies I saw at Picture Palace!

I walked pass the imposing Church, past the Neelam Restaurant, past Clark’s Hotel, past Chick Chocolate, past the Hackman Hotel. Hackman Hotel boasted of one of the best ballroom floors and a live band. It was ‘the place’ to be seen in during peak season. I couldn’t believe what I saw – almost a ruin!

What disappointed me the most was the Rialto Movie Hall. It no longer exists and I had to search for it. At one time, it was not just a movie hall but a place where people hung out to be ‘seen’, or meet up. It was a landmark. It is now hidden behind rusted gates, peeling walls, and overgrown grass and moss.

Hamer General Store still holds fort; as does the Cambridge Book Store run by the Aroras. Ruskin Bond comes to the bookstore every Saturday (in normal times) if he is in town and the ‘bonding’ session with him is huge. Tourists flock to the shop during the season. Some just browse through the collection while waiting for him.

Mulk Raj Anand, William Dalrymple, Atalji, Shakuntala Devi, Gulzar, etc., have visited the shop. I stood and thought of the number of times I visited it … could not remember!!

I walked past what was once the Standard Skating Rink before it got burnt down in 1966, and towards Hawa Ghar, from where one can get the best view of Dehradun (partly obstructed now), and reached Whispering Windows. As I stopped and looked at Whispering Windows, Mr Juyal, who runs a shop below it, asked me, “Recollecting memories?”

Yes, I was. Whispering Windows was every girl’s dream destination to go to and get crowned “Miss Mussoorie”. My sister Kusum wore the crown once – maybe in 1968! Sadly – it was shut down due to Covid, but Mr Juyal told me it was no longer what I had memories of.

Library Point is the other iconic landmark of Mussoorie which was founded in1843. It is characterised by steel columns, gabled roofs, chequered windows and contains some of the rarest books on Mussoorie.

Visiting Mussoorie in 1926, the famous traveller, Lowell Thomas, wrote about the Savoy, “THERE IS A HOTEL IN MUSSOORIE (SAVOY), WHERE THEY RING A BELL JUST BEFORE DAWN SO THAT THE PIOUS MAY SAY THEIR PRAYERS AND THE IMPIOUS GET BACK TO THEIR OWN BEDS!”

One can’t come back from Mussoorie without walking on Camel’s Back Road, so called because the entire road loops around the hill in the shape of a camel. There is a point known to locals as “Lover’s Leap”, where a couple in love were riding when the lady’s horse leaped off the edge. On seeing his love lost, the gentleman too jumped off. Camel’s Back also has a Charles Dickens connection. His correspondent in India, John Lang, lies buried in the cemetery. Also buried in the Camel’s Back Cemetery is “Pahadi Wilson” (Frederick Wilson), well known for living life king size.

I came back to Picture Palace with a sense of agony and ecstasy. Agony at what was lost, ecstasy at what still remains. As I paused at the Tavern, I could hear Mary Hopkins sing, “Once upon a time there was a Tavern
Where we used to raise a glass or two
Those were the days, my friend
We thought they’d never end.”

(Kulbhushan Kain is an award winning educationist
with more than 4 decades of working in schools in India
and abroad. He is a prolific writer who loves cricket,
travelling and cooking. He can be reached at
kulbhushan.kain@gmail.com)

Garhwal Post has established itself as a credible, balanced and forward looking newspaper in India. Based in Uttarakhand, the daily is read by the aware, socially and culturally responsible, high-income elite of society.
Contact us: info@garhwalpost.in
free dating in karachi https://garhwalpost.in/dating-a-recently-widowed-man/