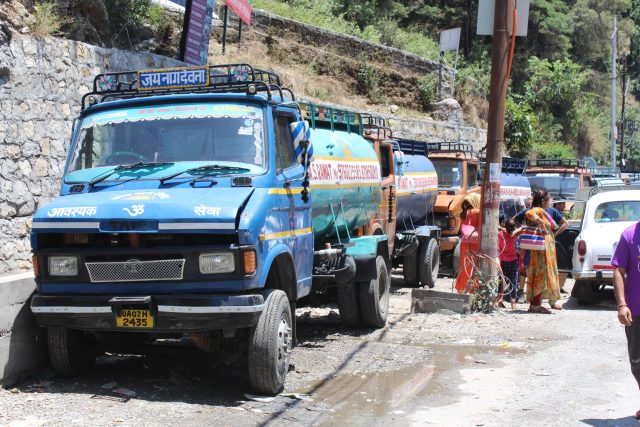 Mussoorie, 26 May: Tanker operators providing drinking water here went on a strike protesting the timings enforced on them in the night, due to which supply of water in most of hotels was stalled. Water tanker operators said that police officials had been told to allow the tankers into the town only from 10 p.m. to 7 a.m., which was not possible for them. They alleged that police was harassing the tanker owners and they were also facing financial losses.
The tankers owners have demanded permission to supply drinking water around the clock, except at the Mall Road. If the demand is not met, the strike would continue and they would also not allow any water tankers to fill water. Owners Laxman, Deepak Rawat and Shakti Rana said the police wanted them to supply water at night but, as there are more than 50 tankers in Mussoorie and it took more than half an hour to fill one, it was impossible for all tankers to supply water at night. They said that, earlier, the tankers were allowed to ply 24 hours except for the mall road, but for the last two years they were being ill-treated by the police, due to which they were suffering financial losses.
Mussoorie police in-charge Bhawna Kainthola said that the time for water tankers had been fixed in order to facilitate the traffic system in during the tourist season. She said it was necessary for local people to cooperate in the smooth arrangement of the system. She added that a meeting would be held soon to solve the problems faced by tanker owners.