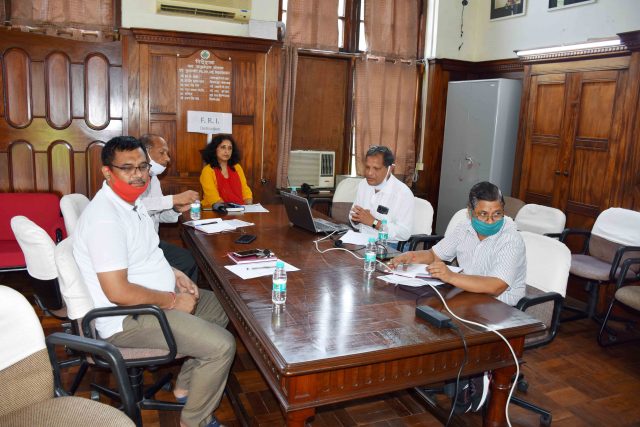 By OUR STAFF REPORTER
Dehradun, 24 Sep: An online webinar for Kendriya Vidyalaya and Navodaya Vidyalaya Teachers was conducted today under the programme, ‘Prakriti’, as per an MoU signed between Indian Council of Forestry Research and Education, Dehradun, and Kendriya Vidyalaya and Navodaya Vidyalaya Sangathan. A total of 143 participants including teachers from various Kendriya Vidiyalayas and Navodaya Vidyalayas under the jurisdiction of FRI – Haryana, Delhi, Punjab, Uttar Pradesh and Uttarakhand – took part in the event.
Richa Misra, Head, Extension Division, FRI, welcomed the participants and gave a brief account of the online training programme and said that contemporary issues pertaining to the forests and environment were being taken up through the webinar. She then invited the Director General, ICFRE, and Director, FRI, Arun Singh Rawat to formally inaugurate the session and deliver the inaugural address. He stated that the Prakriti programme was very well received, under which until last year a number of students and teachers had visited the institute and gained firsthand knowledge about various forestry and environmental issues, besides learning about the ongoing activities of the institute. He stated that due to the ongoing Covid Pandemic, these activities had to be curtailed. Therefore, as a way of outreach, a programme for the teachers of the Kendriya Vidyalayas and Navodaya Vidyalayas was organised, with the aim that they would further transmit the knowledge to their students.
The first lecture of the webinar was delivered by Dr Anup Chandra, Head, Botany division, FRI, on “Biodiversity and Conservation related issues”. He spoke at length about the concept of biodoiversity and gave a detailed account of flora and fauna existing in different parts of the country. He also shared how the country was one of the mega biodiversity countries of the world. He stressed how biodiversity was important and how the teachers should sensitise the students on this. He described the genetic collection in FRI, namely the Herbarium, Botanical garden, bamboosetum, etc., and also the work being carried out to identify and inventorise the flora in different parts of the country.
The second lecture was delivered by Dr Hukum Singh, Scientist C, FE & CC Division, FRI, on “Green House Gases emission and Mitigation”. His described Climate Change and its adverse effect on the environment and human beings. He spoke about the causes and consequences of global warming with reference to the green house gases. He mentioned that teachers could play a major role in sensitising the students on climate change. He stated that a change in lifestyle was required to reduce the carbon footprint of human beings.
The last lecture was delivered by Dr AK Pandey, Scientist G & Assistant Director General, ICFRE, on “Common medicinal plants used in day to day life”. These boosted immunity at a very nominal cost and with almost no side effects. He said these were used by Indians and documented since the times of the Rigveda. Complete treatises like Charka Samhita and other literature had expounded the virtues of the commonly available but highly beneficial plants. He described the properties of more than 15 medicinal herbs and their traditional utilisation by the people. At the time of the COVID-19 pandemic, herbal treatment could be helpful in boosting the body’s immunity.
The anchoring was done by Dr Devendra Kumar, Scientist E, Extension Division. The entire team of Extension Division including Dr Charan Singh, Scientist E, Dr Rambir Singh, Scientist D, Ramesh Singh, Assistant Yatharth, MTS and Anil, Lab Assistant and the rest of the staff helped organise the event.