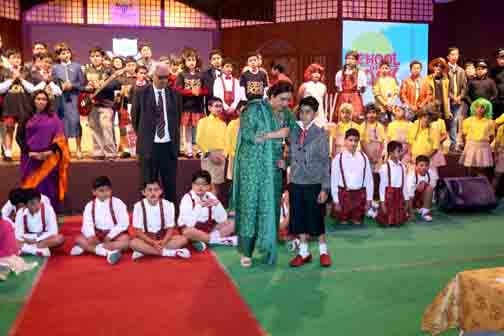 DEHRADUN, 1 Dec: The 81st Founder’s Day of Welham Boys’ School was held on Saturday celebrated with Anil Swarup, Former Secretary, School education as the Guest of Honour. Speaking at the occasion Swarup advised the students to be positive in their outlook towards life and live in the present moment.

Darshan Singh, Chairman of the school’s board of directors insisted on the importance of character building in school.

Dr Gunmeet Bindra, Principal of the school acknowledged everyone’s effort and said that the power of now was significant in life.

Following the speeches was a vote of thanks by the School captain, along with the edition of Welham Newz.

The celebrations kicked off with the school’s Founders Day English production going Technicolor with the Broadway Production of Andrew Lloyd Webber and Tim Rice’s creation of Joseph and The Amazing Technicolor Dreamcoat. This is the vibrant visual display of Joseph, his jealous brothers and one very colorful garment. The thrilling Biblical story traces the journey of Jacob’s favourite son who is blessed with prophetic dreams, lands up in Egypt after being sold into slavery by his brothers. The production hopes to enthrall the audiences with engaging crazy quilt of musical styles, from country western to calypso and bubble gum pop to rock n roll. The songs performed by the enthusiastic and talented Welhamites.

The audio-visual extravaganza of the Broadway classic was exhibited with an original innovative perspective brought to life by the creatively enthused up Welham Boys’ family.

‘The Ensemble’, enthralled the audience with a Latin blues composition, inspired by Carlos Santana’s Black Magic Woman to the much-loved Rock ‘n’ Roll rhythm followed by the signature theme of James Bond films.

The enraptured audience was then treated to a sweet composition based on ‘Raag Chaaru Keshi’, which blended in harmoniously with the western beats, followed by the tablas taking the fore with a rhythmic improvisation.

The Indian melodic instruments then blended in with the western instruments on Raag Chaaru Keshi, with a touch of Cold play concluding with the echo of sound of music.

Garhwal Post has established itself as a credible, balanced and forward looking newspaper in India. Based in Uttarakhand, the daily is read by the aware, socially and culturally responsible, high-income elite of society.
Contact us: info@garhwalpost.in
building a dating app first thing to say on a dating app