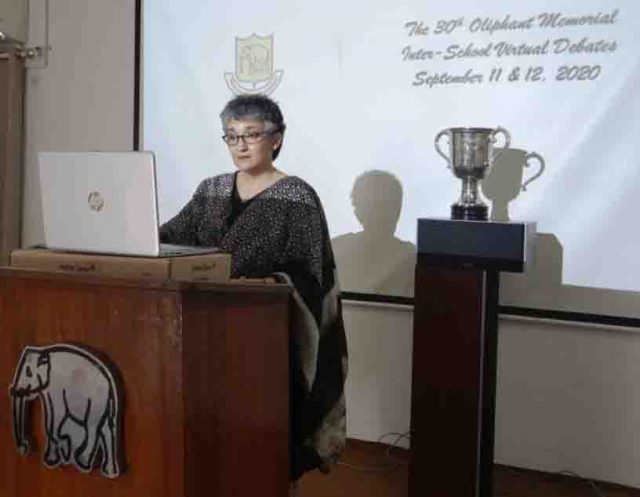 By OUR STAFF REPORTER
DEHRADUN, 12 Sep: Welham Boys’ School organised the 30th edition of The Oliphant Memorial Debate on September 11 & 12, 2020. This prestigious annual debate is held in the memory of Ms. Oliphant, the Founder of the school.
Like every year, this year too saw the best schools from across the country lock horns for the coveted trophy albeit in its online form. Over the course of the last thirty years, the debate has been conducted in several formats and this year’s edition followed the modified British Parliamentary format.
The tournament saw the participation of a total of 16 teams. Battling intense competition across three preliminary rounds, eight teams qualified for the semi-finals. The topic for the semi-finals was The US of A should ban the research and development of Advanced Artificial Intelligence, in view of privacy concerns. Several persuasive arguments were made by teams on both sides. Sannidhya Agarwal from Welham Boys’ School argued that it is difficult for governments to estimate and regulate the development of Advanced Artificial Intelligence.
After highly competitive semi-finals, Vivek High School, Chandigarh, St. Joseph’s Academy, Dehradun, St. George’s College, Mussoorie and Vasant Valley School, New Delhi reached the Finals. The topic for the Final Debate was, This House prefers the legal doctrine of ‘Stand Your Ground’ over the ‘Duty to Retreat’. In an incredibly well-contested final, St. George’s College, Mussoorie bagged the coveted trophy, with Aadi Jain from the same school bagging the award for the best speaker. Vivek High School, Chandigarh was placed second.
Sangeeta Kain, the Principal of the Welham Boys’ School commended the fantastic standard of debating witnessed over the two days. She also congratulated all the participants for engaging so well with complex social and political issues. Overall, the online format of the prestigious debate highlighted the fact that challenges must be seen as opportunities to rediscover and reinvent so that we continue our march from strength to strength.