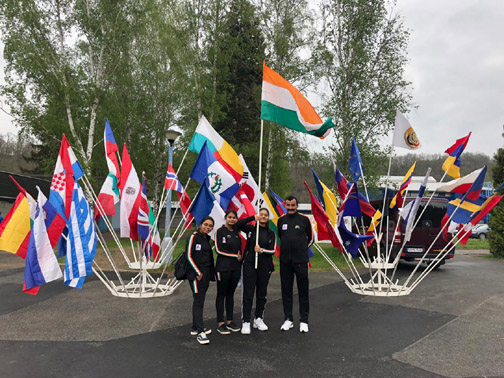 By OUR STAFF REPORTER
Mussoorie, 16 May: Welham Girls’ School, Dehradun, lifted the Seventh Wynberg–Allen Invitational Inter-School Basketball Trophy for the year 2019. Welham Girl’s School defeated host Wynberg–Allen for the title.
Kavya Lal, Ksheerja Arora and Mehr Sekhon scored a number of baskets for the Welham Girls’ side, while Vanika Raitka and Himanshi scored for the Wynberg-Allen side.
The invitational basketball tournament for girls was hosted by Wynberg-Allen School, in which around eleven schools from Mussoorie, Dehradun and neighbouring areas took part this year.
Earlier, in the first semifinal played during the day, Wynberg-Allen School-A team defeated St Thomas’ School, Dehradun, by 18 to 10 points. In the second semi-final match played between The Welham Girls’ School and Unison World School, Dehradun, Welham Girls’ won 62-24.
Sanaya Bharucha gave away the trophies and mementoes to the winners and the runners up. Kavya Lal, Mehr Sekhon of Welham Girl’s School, Vanika Raitka, Sasirintra Gulati and Himanshi of Wynberg–Allen school were declared the Promising Players of the Tournament. Ksheerja Arora of Welham Girl’s School was awarded the trophy for the ‘Most Valuable Player of the Tournament’.
The Principal, Wynberg-Allen, in his message thanked all the schools for their enthusiastic participation in the tournament. He also thanked the coach, Choing Bhotia, Ajit Kumar, Manju Hatwal, Champa Dhakpa and tournament officials Rishi Bangwal, Abhishekh and Rupendra Bajwa for successfully organising and officiating in the tournament. Present on the occasion were Steve Luukkonen, Tashi Tsering, Samandar Singh and Jagmohan Negi.

Garhwal Post has established itself as a credible, balanced and forward looking newspaper in India. Based in Uttarakhand, the daily is read by the aware, socially and culturally responsible, high-income elite of society.
Contact us: info@garhwalpost.in
hookup sites in dallas for dating https://garhwalpost.in/female-inmates-dating/