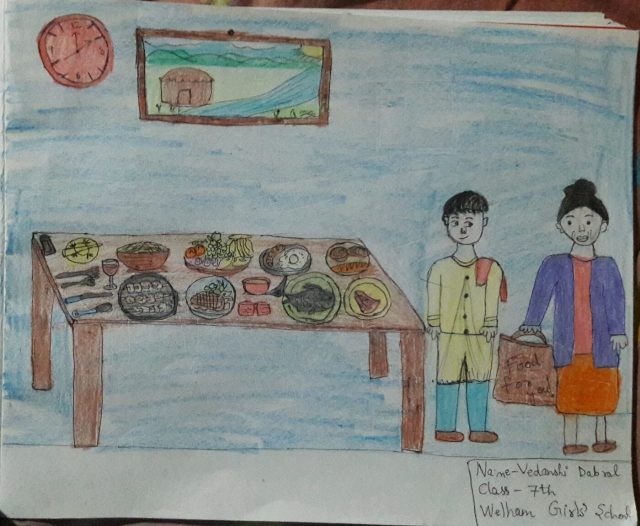 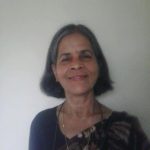 Lakshmi was at the far end of the kitchen, sorting out and cleaning the vegetable tray.

“How many are coming, madam?” she asked cheerfully, “and what else to cook?”

That was Lakshmi! A good cook, focussed on her work, who didn’t waste words. By now she was used to these “ladies’ walk-ins” where madam’s friends came together for the evening tea.

“Nine have confirmed, Mrs Ahuja’s not sure – so make it ten!” said Mrs Kohli.

“Samosas, sandwiches and besan laddoos, you said,” Lakshmi  was washing the potatos, her eyes seeking reconfirmation from Mrs Kohli.

“Yes, and the dhania chutney,” said  Mrs Kohli, “set out the chili sauce too!”

‘Lakshmi is a blessing,’ thought Mrs Kohli as she walked in to the living room to arrange the flowers. So was Pitamber. Lilies, roses and gladioli were already brought in.

“Pitamber, get some more ferns and a couple of gladioli,” she called out. The gardener looked up from the flower beds to acknowledge.

As the CEO’s wife, Mrs Kohli had a roaring social life. Dinners, luncheons, pool parties, outings – she enjoyed it all. Mrs Kohli also loved entertaining friends at home. Lakshmi was an excellent cook, reliable too!

She rarely took leave and, if she did, always with intimation. A cheerful worker, she was a woman of few words. Given the number of guests and the menu, Lakshmi would ensure the right quantity of tasty food was on the table, on time. Apparently she had difficulties at home – both with money as well as with her children. Her daughter was caught up with a boy from another community and the son was not doing very well in studies but she never complained. Her husband was in and out of jobs so no regular income. All that she took in her stride, it didn’t reflect in her work or talk. Once in a while Mrs Kohli tried to draw her out.

“God is watching over, soon things will be sorted out, madam!” she would say closing the doors to further conversation.

“But where is He?” wondered Lakshmi as she shelled the peas in the kitchen verandah, “Couldn’t He see how Sharada was being fooled and misled by that boy? Couldn’t He see how my husband was knocking at every door looking for work?”

“When you come back, try to get some wheat flour or rice from somewhere,” she had said as they parted ways at the gate, “there isn’t enough for dinner….”

“What happened Lakshmi? Why are you crying?” Mrs Kohli had walked in looking for a napkin. There was kindness in her tone, “Tell me, what’s the matter?”

“Sorry, madam,” said Lakshmi as she dried her eyes and got up. As if she would understand the way many of them hid their poverty behind dignity! She moved into the kitchen with the shelled peas saying, “Can make the halwa only when Raju bhaiyya brings the  kaju and kismis; please remind him madam!”

“Samosas, pastries, wafers, cake, ice cream – what a spread!” Lakshmi thought of the empty containers in the kitchen back home and tears flowed again. Borrowing a bowl of rice or atta repeatedly was a public announcement of their poverty. It was much easier to survive on just dal and rice! If only her husband could get some work somewhere he would pick up things on the way. What a pleasure it would be to go home and cook a simple dinner and eat together!

Soon the cooking was done, the dishes were on the table and it was time for Lakshmi to go home.

Her son Ramu came running and called out from the backyard. “Pitaji is home”, he said, “why are you so late? We are hungry!”

Lakshmi leaned against the kitchen wall, waiting for madam, to take leave.

Radha, the maid was putting away things and tidying up the kitchen. With her eyes on the dining table, she whispered to Lakshmi, “Hope all the madams turn up and eat up all these! The fridge is overflowing with leftovers of last evening’s party!”

“Oh, yes! That’s true!” Mrs Kohli overheard as she came in. She noticed Ramu and turned to Lakshmi, “Why don’t you take it home? Take a break from cooking!”

Within minutes the containers from the fridge went into a bag which the boy happily accepted.

“Thank you madam!” said Ramu, his eyes lingering on the bag.

“Mutter paneer, kofta, and paranthas – what a treat!” said Lakshmi as they walked home hand in hand.

“Pitaji will be so surprised!” said Ramu and hastened his steps.

Garhwal Post has established itself as a credible, balanced and forward looking newspaper in India. Based in Uttarakhand, the daily is read by the aware, socially and culturally responsible, high-income elite of society.
Contact us: info@garhwalpost.in
dating app std meetlocals dating site iceland women dating