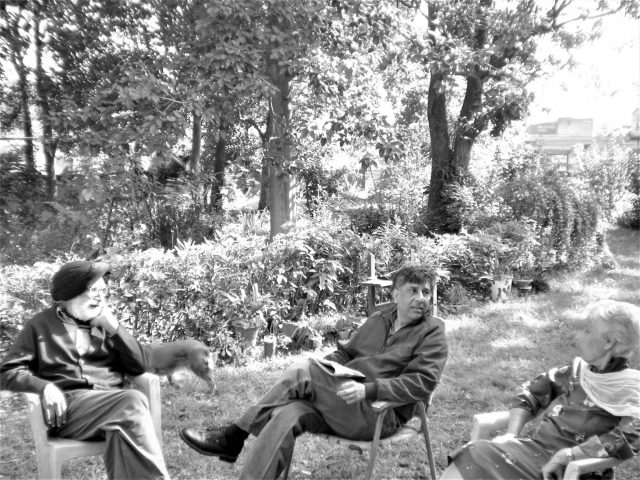 In the evenings, the lights of Mussoorie twinkled in the forefront – a glorious uninterrupted view. There were no buildings high enough to block them (Mussoorie and its lights are no longer visible from my house now). In the winter months – we could see the Himalayas draped in white snow and trying to kiss the blue skies – the snow looked blindingly white and beautiful, and the sky pristine blue and tempting. Lovely birds would chirp throughout the day and I have never seen so many butterflies and ‘jugnoos’ in my life as when we used to stay in Guro Bhavan (the name of our house).

Clement Town changed as its beauty caught the eye of people and what was once an Anglo Indian locality got invaded by outsiders, changing its character. We grew older; we no longer climbed the Jacaranda tree. The Weeping Willow grew old, unrelenting termites ate into her 60 year old trunk, and with a sickenening thud, finally, a storm felled her. The Jamun tree started to grow too big for the new electrical wires and the electricty department cut it down. The twinkling stars of Mussoorie got hidden behind ugly unplanned buildings, and one could no longer see the snow clad mountains.

The trees no longer attracted the birds and, when humans encroached on the adjoining Rajaji Sanctuary, the monkeys made their way into Clement Town.

We all went out to other cities to earn our bread and butter (and a bit of jam too!). My house was looked after by Major Sumra and his wife, Aunty Sumra. They were like foster parents to each of us – we lost our parents early in life.

I used to visit Guro Bhavan on and off. One day, in November 2011, I got a call that Uncle Sumra was ill. I was told that the once Hammer Thrower for India was slowly fading out of life.

I made my way to my house to look him up. My car came to a halt beneath the Jacaranda tree. I looked up at it. The Jacaranda tree looked old. Where and which one was the branch from where my younger sister had once fallen off? Which was the highest branch that the young impish schoolboy climbed, and said “hurray”!!? The one on the right or the one on the left? I could not make out. There were some lovely purple coloured flowers on its branches. Though the tree looked old, it was still beautiful- trees always age more gracefully than human beings. A squirrel dashed up and down its main trunk and looked at me as if I were an intruder. A soft breeze that rustled through the leaves and the flowers. Just like old times!!

I entered the house and went to the room where Uncle Sumra lay. It was the room that was once occupied by my Mom and Dad.

He looked very frail. But he recognised me in a flash, “Kulu, I have been waiting for you.” He mumbled and then made an effort to get up.

I was stunned into silence. Memories of him dancing, of him taking me for patridge and water duck shoots, of him and me driving to Delhi and Ludhiana, and of him lifting a steel trunk above his head to load it into a tempo –all came flashing back. Surely, the curtain was about to fall. I reached out to him. His hands were cold. He whispered, “You have to think of selling Guro Bhavan now. I don’t have much time left. And none of you wants to stay here.”

Uncle was dying, Clement Town as I knew it was already dead.

I left Guro Bhavan, knowing my professional commitments would not allow me to meet him again. I stepped out of his room, past the front verandah and stood beneath the Jacaranda tree. It was a tree as old as the house – maybe older. I looked up.

Suddenly a gust of breeze ruffled its leaves and the purple buds rained on me. I did not brush them off my hair or my jacket. It was as if Guro Bhavan was applauding me and showering its blessing. I also remember telling myself – “See, its crying!!”

Suddenly, a squirrel ran up and down a branch and looked me in the eye. Was it pleading me to stay the night and leave the next day as Mom and Dad would have done?

Then a small flower petal fell into my eyes. It brought out the tears. After many years, I was bonding with something that had dared to stay there without any of us – the Jacaranda tree. It was teaching me a lesson, “Cry if you must –but don’t you quit.” It had stood its ground irrespective of who had come and gone.

It also taught me another lesson. Don’t invest much of your heart in men and women who will pretend they love you. It’s better to invest it in animals and trees. They are more loyal and they don’t desert you even if you leave them!!

I planted a Jacaranda Tree in my adopted home. It will outlive me. I hope it teaches all the subsequent occupants the lessons my Jacaranda tree taught me in Clement Town.

Schools, Colleges and Universities can never teach you what animals and nature can. Provided we are willing to learn from them.

(Kulbhushan Kain is an award winning educationist with more than 4 decades of working in schools in India
and abroad. He is a prolific writer who loves cricket,
travelling and cooking. He can be reached at
kulbhushan.kain@
gmail.com)