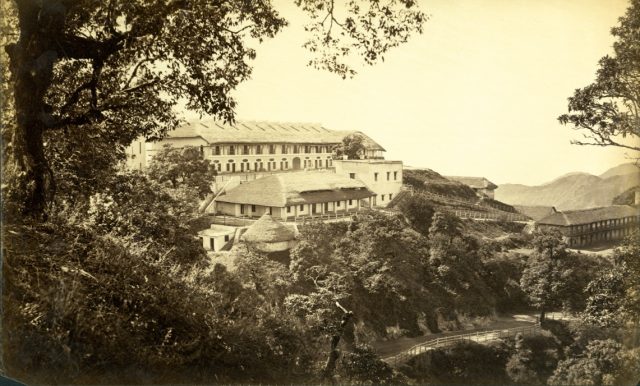 Last week, an unexpected visitor dropped by. Diligent Divyaa – a student at Ashoka University – had her mind set on discovering the lesser known delights of this hill station.
‘Where are all those ice pits? Can’t find a single one you’ve written about!’ She complained.
I hummed. I hawed. Should I break her young heart saying that we had all but wiped out two hundred years of our heritage?
For the only remnants of our last Ice pit are in shambles. And don’t go about blaming the owners. Smita Vaish at the Himalaya Castle Hotel (once the famous Himalaya Club) remembers: ‘Grandfather donated that land to the Municipal Board to make a Children’s Park. What we got is shacks!’ She shows me the ruins of our last ice pit, a marvellous nineteenth century innovation for refrigeration, where ice and snow – mixed with rice-husk – was shovelled into a stone-lined pit. With the base filled with gravel for drainage, it was topped with a simple thatch roof and designed to keep fish, fowl and flesh fresh in summer. The arrival of refrigeration sounded their death knell as from Radha Bhawan to Charleville and from Savoy to Benog were filled with garbage and rubble.
My first brush, if I can call it that, with ice-pits dates back to the dying years of the 1960s, when the whole station turned upto see a shiny Fiat car that had crashed through the Himalaya Castle Hotel’s railing, before coming to rest, wedged upside down like a beached whale inside the pit.
‘Brakes failed?’ Some asked.
‘How could it roll on is own?’Others wondered.
Later, much later, did we find out that it was our first failed carjacking. But that’s getting ahead of our story for there was nothing to show the hand of man.
Luckily no one had got hurt and at the time, it seemed as if the car had acquired a life of its own and had started off in the middle of the night. But apart from the flutter, it only attracted quite a crowd. Though soon after, all the bits of the puzzle fell into place. The carjackers struck again by jump starting an old Chevolet that belonged to one of our royals (many of whom still thronged the hill station in those days.) The boy’s joyride down Tehri road became the stuff of legends, though their fault, if you insist on calling it that, was failing to notice the diminishing levels of the fuel gauge. Come to think of it, crimes are mostly discovered because criminals, even the sharpest, do sooner of later do some stupid thing. Often they are too careful; they make their proofs too perfect for our imperfect world. Sometimes they are careless or on the spur of the moment, they do a rash thing. But somehow a mistake is made.
Subsequent events, unfolded like a black comedy. Please remember that in those early days, Mussoorie had only three cars: the white Ambassador belonged to Mr. Puri’s, Kwality Restaurant’s Manager; the light tan one was Dr. Jwala Prasad’s, the station’s well-known General Practitioner and the metallic blue Fiat, that you saw outside Library’s Whispering Windows Restaurant, belonged to its owner, the dapper Mr. D. P. Singh.
Speeding along with the breeze in their hair, the boys had barely turned the corner near Kanatal, when the car complained, coughed, choked and gasped for fuel. Switching off the engine, the boys coasted down the slope, heading straight into a row of coal-tar drums carefully placed by the police across the road on the outskirts of Chamba. Their luck had run out.
Taken into custody, the three teenagers were brought back with much fanfare in quite a procession to the local Kotwali.
What happened to them afterwards? You may well wonder.
The case dragged on for years. It was, sooner than later, lost in the maze of the judicial process even as the hill station’s citizenry lost interest in the case. The boys simply vanished into the greyness of India. They were never to return. I guess if you sup with the Devil, you had better have a long spoon.