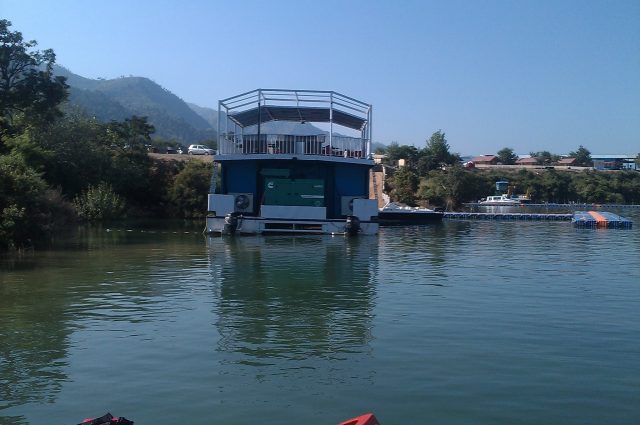 The Inland Vessels Bill 2021 was passed in the Lok Sabha on 29 July, 2021. It was introduced in the House by Union Minister for Ports, Shipping and Waterways Sarbananda Sonowal. The Bill seeks to incorporate unified law for the country, instead of separate rules framed by the states. The registration certificate under the new law will be considered valid all over the country, and separate permissions from states shall not be required. The Bill also provides for a central database for recording the details of the vessels and their crew on an electronic portal. Sonowal said that the Bill had been brought to promote economical and safe transportation and trade through inland waters, to bring uniformity in application of law relating to inland waterways and navigation within the country, to provide for safety of navigation, protection of life and cargo, and prevention of pollution that may be caused by the use or navigation of inland vessels, to ensure transparency and accountability of administration of inland water transportation, to strengthen procedures governing the inland vessels, their construction, survey, registration, manning, navigation and such other matters connected therewith or incidental thereto.

The Inland Vessels Act, 1917 was enacted to consolidate the enactments which then existed relating to inland vessels. It governed the navigation of inland mechanically propelled vessels plying within the inland waters of India. The said Act was last amended in the year 2007. Since then, several major developments have taken place in the inland water transport sector. One of the important developments is the declaration of one hundred and eleven national waterways under the provisions of the National Waterways Act, 2016. Systematic utilisation of the said declared national waterways and tapping the potential of inland water transportation will lead to the increase in the usage of mechanically propelled inland vessels.

The existing Inland Vessels Act, 1917, inter alia, empowered the State Governments to frame rules on their own. However, the rules made by various State Governments are not uniform across the country. The requirement of no objection certificate or endorsement to ply beyond the State jurisdiction, lack of uniformity of applicable norms and standards prescribed by various State Governments, lack of flexibility in its provisions, and the like, are shortfalls in the said Act. Hence, a comprehensive review of its provisions was necessitated to overcome such shortfalls and to cope with the present needs and foreseeing developments in the near future. Thus, it became expedient to enact a new legislation to replace the century old archaic Inland Vessels Act, 1917.

The proposed new legislation intends to bring in uniformity in the provisions in respect of States, so as to promote economic and safe transportation and trade across inland waters and protect the interest and needs of stake holders. Further, the State Governments are being entrusted with the power and responsibility to implement the provisions of the proposed legislation, in accordance with the standard and measures as may be provided by rules by the Central Government.

The new law is different from the lnland Vessels Act, 1917 in terms of its intent, content and implementation, and will—
(i) promote economical, safe transportation and trade through inland waters;
(ii) bring uniformity in application of law relating to inland waterways and navigation within the country;
(iii) provide for safety of navigation and protection of life and cargo;
(iv) provide for prevention of pollution that may be caused by the use or navigation of inland vessels;
(v) ensure transparency and accountability of administration of inland water transportation; and
(vi) strengthen the procedures governing the inland vessels, their construction, survey, registration, manning, navigation and other related matters.
The salient features of the Inland Vessels Act, 2021, inter alia, are—
(i) to empower the Central Government to provide uniformly the applicable standards for seamless and safe navigation of inland vessels by rules;
(ii) to empower the State Governments to declare by notification any inland water area into Zones depending on the maximum significant wave height criteria;
(iii) to empower the Central Government to provide the standards to classify and categorise mechanically propelled inland vessels, standards and processes involved in registration of vessels, standards for identification and categorisation of special category vessels, issuance of certificate of registry, training and minimum manning scales by rules;
(iv) to enable the State Governments to implement the provisions in compliance with the standards and measures as may be provided by rules by the Central Government;
(v) to provide for a central data base, e-portal for registration and crew data base;
(vi) to provide for new requirements of life safety, fire safety, navigational aids and communication appliances by rules to be made by the Central Government;
(vii) to empower the Central Government to provide the permissible limits of discharge of certain pollutants, such as sewage and to provide for issue of prevention of pollution certificate as a compliance requirement by rules;
(viii) to provide for wreck and salvage and to empower the State Governments to appoint Receiver of Wreck;
(ix) to introduce provisions regarding principles of liability and limitation of liability, which improvises and expands the concept of insurance to ensure secure trade and trade practices;
(x) to introduce improvised provisions pertaining to casualties and investigation and also to provide for preliminary inquiry and formal investigation;
(xi) to provide for revised penalties and punishments so as to ensure deterrence of wrong doers and compliance with the provisions;
(xii) to introduce a new Chapter to make provisions for regulation and governance of the unregulated sector of non-mechanically propelled inland vessels, and to empower the State Governments to provide for the minimum regulations on such non-mechanically propelled inland vessels;
(xiii) to provide for composition of offences punishable with fine only;
(xiv) to repeal the Inland Vessels Act, 1917.

(Vipul Dhasmana is a Marine Techno-Legal Consultant based in Dehradun, Uttarakhand)

Garhwal Post has established itself as a credible, balanced and forward looking newspaper in India. Based in Uttarakhand, the daily is read by the aware, socially and culturally responsible, high-income elite of society.
Contact us: info@garhwalpost.in
dating app thursday https://garhwalpost.in/dating-app-for-professionals/ meet uk singles