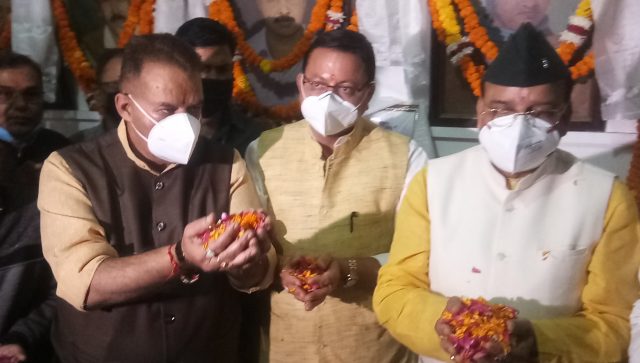 Mussoorie, 2 Sep: Various political and social organisations, family members of the martyrs as well as locals marked their presence at the Martyrs’ Memorial in Jhulaghar here, today, and paid their heartfelt tribute to the Uttarakhand Movement martyrs on the 27th anniversary of the Mussoorie firing. A ‘Sarvadharma Sabha’ was also organised on the occasion. In view of the Corona epidemic, special attention was paid to social distancing.
Chief Minister Pushkar Singh Dhami, Union Minister of State for Tourism and Defence Ajay Bhatt and Cabinet Minister Ganesh Joshi reached the Martyrs’ Memorial and also paid their tribute. On this occasion, Chief Minister Pushkar Singh Dhami promised that Uttarakhand would be developed in accordance with the vision of the martyrs. New industries would be set up in Uttarakhand. He said that he had participated in the statehood movement and was committed to identifying the agitationists by 31 December so that their families could also get the benefit of pension. He promised that the people evicted from Shifan Court would be rehabilitated. The ropeway project would be launched on after this was done.
Dhami claimed that the state government was working continuously to ensure development according to the wishes of the people and in a planned manner.
Union Minister Ajay Bhatt, while paying homage to the martyrs, said that the state government was working in accordance with their dreams – a lot had been done and much more would be done. He added that the Central Government is working for the development of the country, through its many schemes, including in the field of tourism. He said that Uttarakhand had great tourism potential, as had Mussoorie.
Cabinet Minister Ganesh Joshi also paid tribute to the martyrs and said that Mussoorie had played an important role in the statehood movement. The martyrs would not be forgotten. Asserting there had been many big changes in the journey of 21 years and all the people of the state had played their part. He acknowledged that much more needed to be done.
UKD leaders Trivendra Panwar, BD Raturi and Jai Prakash Upadyay said the martyrs sacrificed their present for the future and their dreams still needed to be fulfilled. They alleged that, both, the BJP and Congress government had done nothing for development. Migration from the state had left the hill areas empty. They lamented that, even after 26 years, the killers of the martyrs had not been punished.
Uttarakhand agitationist Devi Godiyal and social activist Manish Gouniyal said Uttarakhand was formed for the preservation of water, forests and land but, today, liquor, land and mining mafia were exploiting the state. BJP leaders OP Uniyal and Vijay Ramola also addressed the gathering.
Also present were Jot Singh Gunsola, Manmohan Singh Mall, Bhagwati Prasad Sakalani, Bhagwan Singh Dhanai, Ganesh Shaili, Municipal President Anuj Gupta, Mussoorie Congress President Gaurav Aggarwal, BJP Mussoorie President Mohan Patwal, Kushal Singh Rana, Jasbir Kaur, Darshan Rawat, Pratap Panwar, Kuldeep Rauchella, Satish Dhaundiyal, Rajeev Agarwal, Arvind Sonkar, Sunil Panwar, Sandeep Sahni, Jagjeet Kukreja, Vijay Ramola, Gambhir Panwar, OP Uniyal, Madan Mohan Sharma, Naveen, Dependra Bhandari, Sumit Dayal, Ankur Saini, Harpal Khatri and many others.

Garhwal Post has established itself as a credible, balanced and forward looking newspaper in India. Based in Uttarakhand, the daily is read by the aware, socially and culturally responsible, high-income elite of society.
Contact us: info@garhwalpost.in
encounters dating app dating millionaire sites