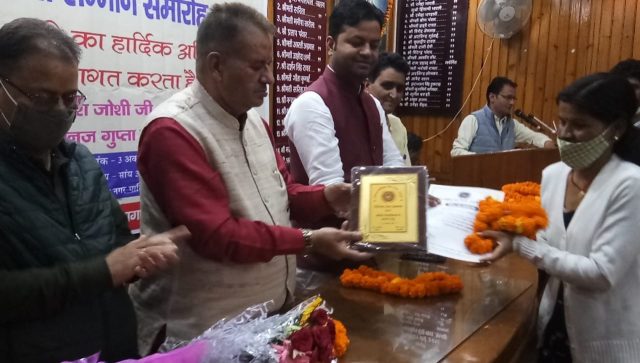 By Sunil Sonker
Mussoorie, 3 Oct: Corona Warriors and organisations that cooperated in the Corona Vaccination programme were felicitated by Active Media Press Club, here, today.
Cabinet Minister Ganesh Joshi, who was the Chief Guest at the felicitation function organised at the Municipal Auditorium, lit the inaugural lamp. Deepak Saxena, President of the Club, and members welcomed the minister and other guests.
Corona Warriors and institutions that have made special contribution to the corona vaccination were presented citations and mementos.
In his interaction with reporters, Minister Ganesh Joshi thanked Prime Minister Narendra Modi for the campaign against corona. Out of India’s population of 135 crore, more than 90 crore people had been corona vaccinated. Uttarakhand had excelled in this task. Mussoorie ranked first in Uttarakhand.
He added that, under the Jal Jeevan Mission, Prime Minister Modi had a dialogue with the head of Kyarkuli Bhatta village in Mussoorie and was told that 100 percent of village residents had been vaccinated, receiving praise for the achievement. He also lauded Chief Minister Pushkar Singh Dhami for working for the development of the state. He also appreciated the Active Media Press Club for felicitating the Corona warriors.
Minister Joshi added that, for the 2022 elections, he was ready for all challenges. He still had to serve Mussoorie and its people, who had great faith in him. Soon, he would present a report card to the people of Mussoorie on what he done in the past 10 years. He revealed that funds had been provided to the municipal administration for the vendor zone, while Rs 76 lakh had been approved for the development of the Rajpur Mussoorie Trekking Route.
Present on this occasion were Municipal President Anuj Gupta, Executive Officer Ashutosh Sati, BJP President Mohan Petwal, former Municipal President OP Uniyal, Active Press Club President Deepak Saxena, General Secretary Amit Gupta, Mohsin Khan, Upendra Thapli, Dr Khajan Singh Chauhan, Dr Pradeep Rana, Trade Union President Rajat Agarwal, General Secretary Jagjit Kukreja, Megh Singh Kandari, Mahesh Chandra, Pushpa Padiar, Amit Panwar, Abhilash, Sapna Sharma, Dharampal Panwar, Nagendra Uniyal, Bhavna Goswami, Namita Kumai, Geeta Kumai, etc.