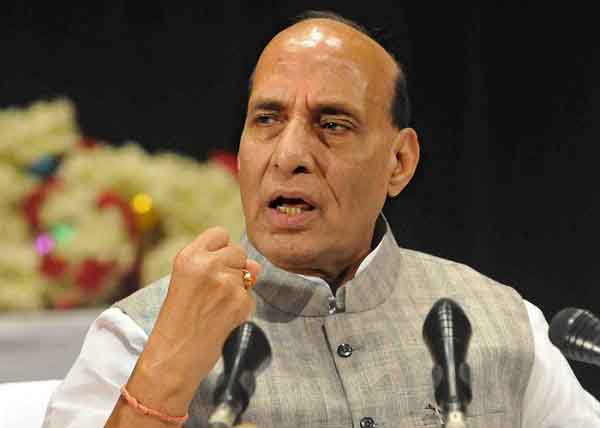 DEHRADUN, 15 Jun: Defence Minister Rajnath Singh today emphasised the deep and historic relationship between India and Nepal and claimed that misunderstandings in Nepal over some issues and, in particular, over the Dharchula-Lipulekh route would be resolved through meetings between the two countries.
Singh was addressing a virtual rally in Uttarakhand today. His rally was attended by prominent BJP leaders in the state and across the country. In his virtual rally, Singh also praised the performance of the Uttarakhand Government in dealing with the Corona pandemic.
Singh claimed that the relationship between India and Nepal was not an ordinary one but that of ‘roti’ (bread) and ‘beti’ (daughter). Admitting that some misconceptions had risen in Nepal regarding the Dharchula-Lipulekh route, he said it would soon be amicably solved through sittings between the two countries. Any number of fences could be put up beyond Dharchula but the relations between the two countries could not be broken.
Earlier, pilgrims used to go to Mansarovar via the Nathula Pass. It was a longer route but, now, the Border Roads Organisation (BRO) had built a link road till Lipulekh. This had created a new route to Mansarovar. This 80 km long road, built in Indian territory, he reminded, would reduce the journey time to and from Mansarovar by six days.
The Defence Minister said that Uttarakhand was Devbhoomi and Veer Bhoomi. It was a land of hard work and valour. He reminded the people that he was the chief minister of undivided UP when Uttarakhand was carved out of the parent state and he had got an opportunity to visit each and every region of Uttarakhand. Praising the work of the Uttarakhand Government in tackling the Corona pandemic, he said that the Covid-19 care centre at Bhararisain (Gairsain, District Chamoli) had been appreciated by the Central team that had inspected it, recently.
Singh said that Kedarnath reconstruction work had been done as per the instructions of Prime Minister Modi. Uttarakhand was racing ahead on the path of development. He said that in the past six years the country had made a lot of progress. With the increase in international credit, the economy had been pushed up from the ninth position to the 5th position. The wisdom with which PM Modi had taken steps to prevent corona virus infection was being appreciated all over the world along with the WHO. The health infrastructure had also been strengthened.
CM Trivendra Rawat put forward the achievements of the Modi Government at the Centre. He said that PM Modi had taken many important steps at the right time to prevent the corona virus. The rate of infection had been greatly controlled due to the timely lockdown. A lockdown across the country was not an easy decision. He said that the state government had completed a tenure of more than three years. Rawat claimed that out of the promises made to the public in its manifesto, 85 percent of the promises had been fulfilled.
The Chief Minister said that lakhs of expatriates had returned to the state due to Corona infection. The state government was constantly trying to provide employment opportunities to those migrants. There was no shortage of funds in the state to deal with the corona virus. The state government had made full preparations to prevent corona infection. As many as 17,000 beds were available in Covid Care Centres. ICUs had been arranged in every district. Ventilators were also available in sufficient quantities. In the last four months, 400 doctors had been appointed in the state. He said that special attention ought to be paid to social distancing, use of masks and hygiene to prevent corona.
Human Resource Development Minister Ramesh Pokhriyal ‘Nishank’, MPs Ajay Bhatt, Mala Rajyalakshmi Shah, Tirath Singh Rawat and Ajay Tamta, Rajya Sabha MP Anil Baluni, State Cabinet Minister Madan Kaushik, Higher Education Minister of State Dr Dhan Singh Rawat were among those who participated in the virtual rally through video conferencing. State BJP President Banshidhar Bhagat and senior BJP leaders including all party MLAs were also among those who attended the virtual rally.