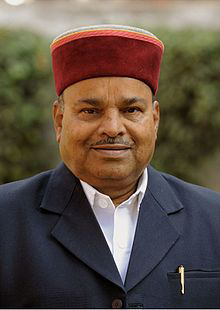 By Arun Pratap Singh
DEHRADUN, 13 Mar: Union Minister and in-charge of the party affairs in Uttarakhand, Thawar Chand Gehlot today claimed that winnability would be the major criteria for the BJP in choosing candidates for the parliamentary polls in Uttarakhand. He said that feedback had been taken in respect of all the five parliamentary seats and the candidates on all the five LokSabha seats were likely to be announced either on 16 March or 18 March after the final decision by the Central Election Committee of the party.
To a question whether the present Tehri MP, Mala Rajyalaxmi Shah would be dropped in view of her “weak position”, Gehlot responded that the party’s feedback had not shown that she was on a weak wicket, though the decision in respect of all the candidates would be taken by the Central Election Committee. The state election committee had already sent the panel of recommended names to the Centre.
To a question if the party would repeat BC Khanduri as candidate from Pauri given his ‘claim to be fit for the polls’, Gehlot said that the party had lot of respect for Khanduri and would certainly respect his views while selecting the candidates for the parliamentary polls.
Gehlot dismissed the allegations of corruption by the Modi Government levelled by the Congress leader Rahul Gandhi as baseless and reminded that it was Congress which was corrupt and more than half a dozen of its top leaders were out on bail on charges of corruption! He charged the Opposition parties and leaders of indulging in negative politics. He claimed that at anytime in the history of independent India, as a chief opposition party, the BJP had never indulged in negative politics as Congress was doing. Whenever there was any danger to the security of the country, the BJP had fully supported the government of the day whereas the Congress was doing exactly the opposite.
Gehlot claimed that the BJP Government had delivered on most promises made in the party manifesto for the general elections in 2014! He claimed that under the PM’s Jandhan Yojana, over 34 crore bank accounts were opened. More than 13 crores persons had been given low interest loans without any collateral security under the Mudra Scheme. Of them, 4.5 crores had been given loan for the first time in their lives!  More than a crore of persons had been given loans on low interest rates under the Stand-up and Start-up scheme and this had generated huge direct and indirect employment!
Gehlot also dismissed the allegation levelled by newly appointed Congress General Secretary Priyanka Gandhi that the BJP was destroying the harmony in the country and asserted that the BJP truly believed in Sarvadharma Sambhav (Equality of each religion) and Sabka Saath Sabka Vikaas. He said that the rally of Congress President Rahul Gandhi in Dehradun on 16 March would not dent the BJP’s chances in anyway in Uttarakhand. There was a pro incumbency wave in the country and in Uttarakhand in favour of Narendra Modi and the BJP. He claimed that the BJP was going to win all the five seats here with a huge margin once again! Among those present on the occasion were the BJP State President Ajay Bhatt and senior party leaders Naresh Bansal, Vinay Goyal, Devendra Bhasin and Shadab Shams!