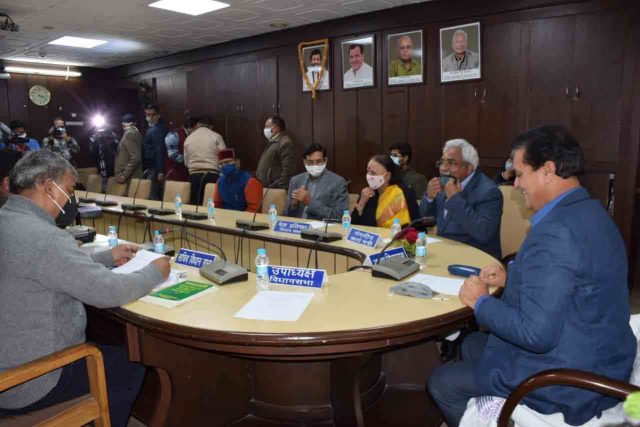 By Our Staff Reporter
Dehradun, 20 Dec: A meeting was held today at the Vidhan Sabha, here, under the chairmanship of Speaker Premchand Aggarwal to discuss the three day winter session of the House beginning tomorrow. It was attended by the leaders of the parties and members of the business advisory committee.
The party leaders promised to cooperate in the smooth functioning of the House. Discussions were held on how the House would be conducted. The Speaker focused particularly on the situation created by the ongoing Covid pandemic. The business advisory committee discussed functioning of the House on 21 and 22 December. The Speaker said that, on 21 December, tribute would be paid to members of the House who had passed away. These included the BJP legislator from Salt, the late Surendra Singh Jeena; former Deputy Speaker and Congress leader, the late Dr Anusuya Prasad Maikhuri; former MLA, the late Sunderlal Mandrawal; and erstwhile UP legislator from Pithoragarh, the late Krishna Chandra Punetha; and former MLA Tejpal Singh Panwar.
The Supplementary Demands would be placed before the House on 21 December, discussion on which would be held on 22 December. Question Hour would be conducted and bills presented. The business advisory committee would meet again to discuss proceedings on 22 December.
The situation has become particularly complicated with Chief Minister Trivendra Singh Rawat having tested Covid-19 positive and in home isolation.
Present on the occasion were Parliamentary Affairs Minister Madan Kaushik, Deputy Speaker RS Chauhan, Leader of the Opposition Dr Indira Hridayesh, MLAs Pritam Singh, Khajan Das, Vidhan Sabha Secretary Mukesh Singhal, Secretary Prem Singh Khimpal, Narendra Rawat, etc.