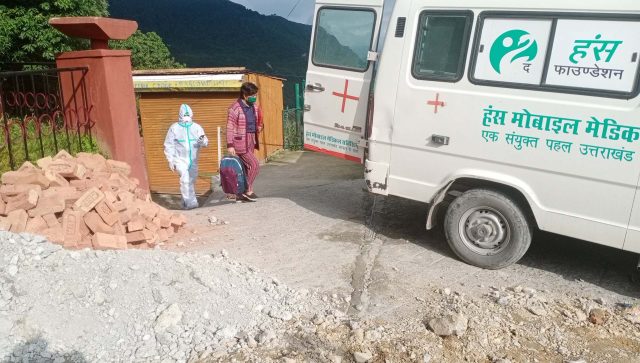 MUSSOORIE, 23 Jun: A 40-year-old woman in Barlowganj Maryville Estate has tested Corona positive causing a stir in the area. Showing preparedness, a medical team was called from Dehradun and the patient was sent to Doon Hospital by a Covid-19 specific ambulance.
SI Neeraj Kathait said that the woman, along with her 70-year-old mother, had come from Maharashtra to Barlowganj on 20 June, which was reported to the police and both were put under home quarantine by the police, with supervision by ASHAs. The 40-year-old tested positive on Tuesday.
At the same time, the 70-year-old mother has been home quarantined and will also be tested. The entire area is being sanitised by the municipality administration and people who came in contact with the women are being identified so that they can also be quarantined. Kathait has urged people to remain alert and follow the advisories issued by the government especially on wearing masks and adopting social distancing.