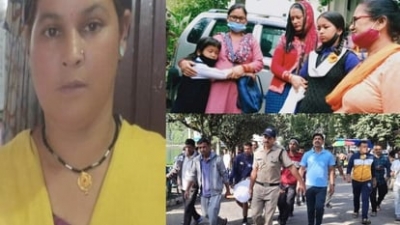 Nainital, June 23 (IANS) The body of a woman was found in Naini Lake here after some passer-by saw it floating on Thursday morning.
The police reached the spot after receiving the news and fished out the body from the lake with the help of locals. The body was later sent for post-mortem.
According to Senior Sub-Inspector, Mallital police station, Deepak Bisht, the woman has been identified as Kamala, wife of Kishan Giri, a resident of Krishnapur. Her husband Kishan works as a gardener at Himachal High Court Advocate General’s office.
Kamala’s youngest daughter Deepa Giri came into limelight after she performed yoga with Prime Minister Narendra Modi on International Yoga Day.
As per the information, Kamala had left home at around 3 p.m. on Wednesday for some work. When she did not return till late night, her husband Kishan started looking for her, but no trace was found.

On Thursday morning, people who were out for morning walk saw the body floating in the lake and informed the local Mallital police.