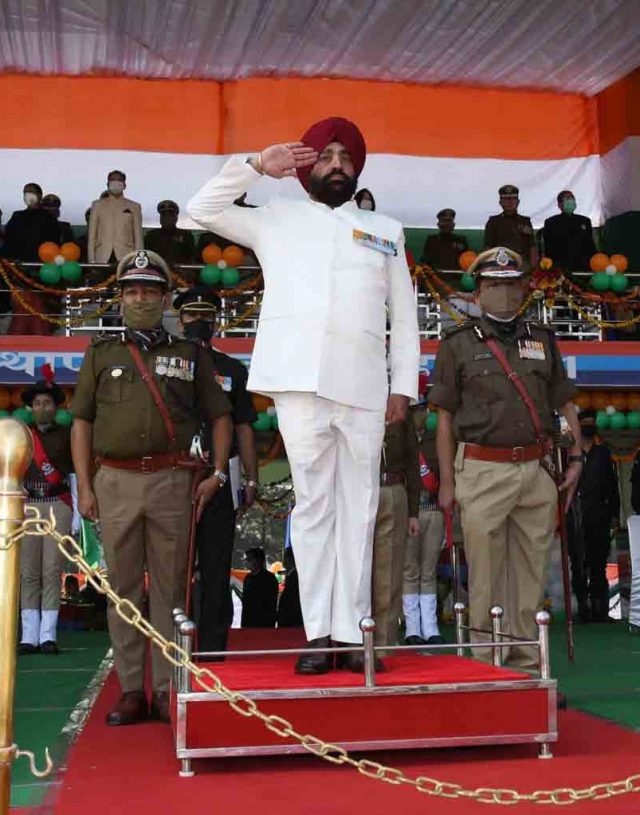 By Our Staff Reporter
Dehradun, 9 Nov: Governor Lt Gen Gurmit Singh (Retd) took the salute, today, at the Ceremonial Parade held in the Police Lines, here, on the occasion of State Formation Day. On this occasion, Singh decorated 12 officials of Uttarakhand Police with the President’s Police Medal, and Police Medals. Also, the Governor and the Chief Minister released a development booklet, “Vikalp Rahit Sankalp, Naye Iraade, Yuva Sarkar” published by the Information and Public Relations Department. Along with this, the annual issue of the Uttarakhand Police Patrika and Upva were also released.

Addressing the gathering, Singh extended his best wishes to the people on State Formation Day. He also paid tribute to the state agitationists. The Governor congratulated the police personnel for the disciplined and grand parade. He said that the foundation of law and order of the nation or any state was the police. With the passage of time, the functions and responsibilities of the police were increasingly expanding. The role of modern day Police was not limited to enforcing law and order and controlling crime. It had also become constructive. Today, the Police was doing important work like giving proper guidance to youth, running drug de-addiction campaigns, assisting helpless people, engaging in humanitarian service and providing help to the people in trouble. The Governor said that better coordination between police and the public was necessary. The need for effective policing had increased tremendously now. The police needed to continuously improve their capabilities and training according to the new circumstances. In today’s digital age, cyber crime and social media crime were emerging as a big challenge before the police. For this, there was a need to constitute a high level cyber cell in the police department. Technology, Artificial Intelligence, Information and Communication technology could prove to be a boon for the police in controlling crime. 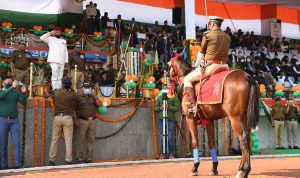 In fact, the most important aspect at the time of the lockdown was the social service work done by the police. Apart from ensuring that the rules of social distancing were followed, the police also had to do the work of giving necessary information to the people and supplying essential commodities
Singh said that, this year, Uttarakhand had completed 21 years of existence. People’s expectations from a young state would also be high. Certainly more seriousness would be required in the functioning of the administration and in the vision and mission for the state. One would have to make a roadmap for development on the basis of the folk culture, beautiful traditions, love for nature and the sentiments of the local people.
The Governor reminded that women are the backbone of the economic and social structure in the hill areas. He added that, recently, he had visited some hill districts of the state. Women of the hills were bringing about a revolution through local products and handicrafts. Women were becoming financially empowered through self-help groups. Their income was increasing. This was nothing short of a miracle. He expressed admiration for the hardworking and self-reliant women of the mountains.
He said that some youths in the hill districts of the state had set a very good example of reverse migration. Migrant youth who had returned from the metros had opened the doors of self-employment in their villages and homes through mushroom cultivation, poultry farming, production of fruits and vegetables. Some youth were promoting the local products of Uttarakhand nationally and internationally.
Governor Singh said that the Prime Minister had a dream to develop Uttarakhand as the spiritual and cultural capital of the world. In future, people from all over the world would come here for spiritual peace. For the first time in modern history, Kedarnath Dham was being reconstructed on such a large scale. The Prime Minister said that the third decade of the 21st century would belong to Uttarakhand. He said that the ropeway was being constructed for Hemkund Sahib’s darshan. Now Sikh devotees from all over the world would be able to visit Hemkund Sahib more conveniently.
DGP Ashok Kumar informed the gathering about the achievements of Uttarakhand Police.The Ceremonial Parade was led by Janmejay Khanduri, Deputy Inspector General of Police/Police Chief, Dehradun.