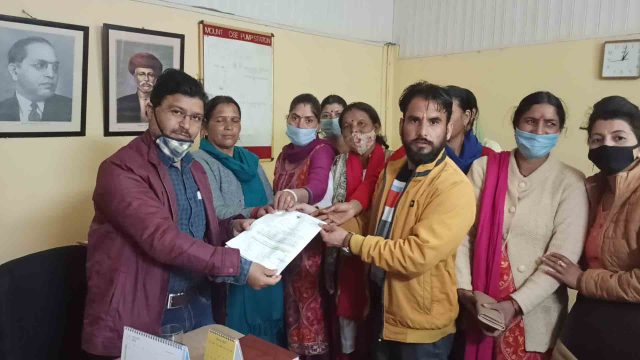 By Our Staff Reporter
Mussoorie, 19 Mar: The problem of drinking water supply is continuously increasing here, due to which the women of Indira Colony surrounded the officials of Mussoorie Garhwal Jal Sansthan under the leadership of Councilor Kuldeep Rauchela and created a ruckus. The women said that drinking water was not being supplied in their area for the last several days. Phone calls are being made to the authorities but no one is ready to listen. They said that the linemen of the area had indulged in corruption. Influential people are being provided plenty of drinking water, but the common person is craving for every drop.
They said that they had laid siege to the office of Garhwal Jal Sansthan officials and, if their drinking water problem is not solved, then a major agitation would be launched against the Garhwal Jal Sansthan. They reminded that government spoke of giving a water connection in every house for one rupee, but unfortunately, it has forgotten to provide water in those taps. They urged local MLA and Cabinet Minister Ganesh Joshi to take immediate action in this regard.
Councilor Kuldeep Rauchela said the Garhwal Jal Sansthan is not paying attention to their demands. He asked the officials of Garhwal Jal Sansthan to lay a 4-inch line from Zero Point to Indira Colony from Chandaladi to solve the problem.
Executive Engineer KC Painuly of Garhwal Jal Sansthan said that due to some technical reasons, drinking water couldn’t be supplied to Indira Colony and the department is supplying drinking water from tankers. He said that there was very little water from natural sources due to lack of snowfall and rain.
Present at the protest were Priya, Pramila, Sangeeta, Satish, Susheela, Savita, Meenu, Reena, Pushpa, Guddi, Tara Devi, Seema Devi, Kailash, Parvati, Rami Devi, Kusum, etc.