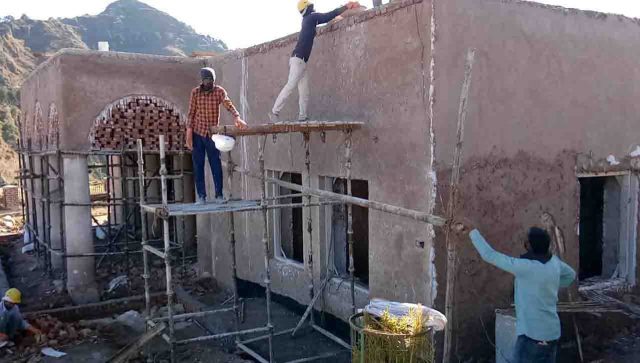 By Sunil Sonker
Mussoorie, 14 Dec: The historic George Everest House, here, will now be seen in its old form. It may be known that, under the Uttarakhand Tourism Infrastructure Development Investment Programme, the Sir George Everest Heritage Park is being renovated under a scheme funded by the Asian Development Bank. The estimated cost is Rs 23.70 crores. The renovation work is being done by Arun Construction Company.
In the past, many people have been accused of tampering with the Everest House. This was denied by the site engineer, Kuldeep Sharma. He said there had been no tampering with the original appearance of George Everest House as it was during the British era. The walls are being built in their original form, based on its old map. The front had been damaged long ago, which led to the rumours, but the original form was being retained.
He said that, when the renovation is completed, the George Everest House would be a centre of attraction for the tourists, along with the locals. He a museum is being built at the site in which the history associated with Sir George Everest would be displayed along with the equipment used in survey work. He added that special care is being taken for parking and other basic facilities. At the same time, the road leading from the main road to Sir George Everest House has also been rebuilt.
He said that the construction work took a long time due to the lockdown, but now it is being done at a rapid pace. Tourism Minister Satpal Maharaj and his wife had conducted inspection of the construction works and expressed their satisfaction.
Renovation work was initiated by Tourism Minister Satpal Maharaj on 18 January, 2019. This work was to be finished on 17 June, 2020, but due to the Covid-19 epidemic, the work could not be completed in time. The plans include a Cartographic Museum, an Outhouse, Bachelor House, Observatory, Star Gazing Huts, Star Gazing Domes, Open Air Theatre, Portable Toilet, Food Van and Track Route Renewal for George Everest Peak.

Garhwal Post has established itself as a credible, balanced and forward looking newspaper in India. Based in Uttarakhand, the daily is read by the aware, socially and culturally responsible, high-income elite of society.
Contact us: info@garhwalpost.in
should i date again