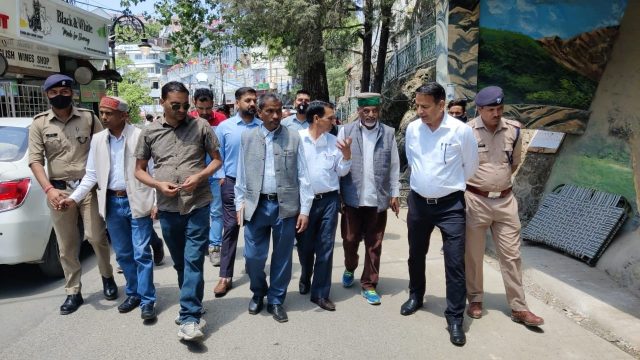 By Sunil Sonker
Mussoorie, 26 Apr: Work is being done continuously at the administrative and government level to prepare Mussoorie for the tourist season. It is planned that the Mall Road, here, will be equipped with beautiful and basic facilities.
Mussoorie SDM Naresh Chand Durgapal, along with officials of the Mussoorie Dehradun Development Authority, Public Works Department, National Highway, Municipality, Garhwal Jal Sansthan, Jal Nigam, conducted on-site inspection of a two kilometre stretch of the Mall Road, here, today. The proposal to redo the Mall Road to a depth of about 8 inches was discussed. This would ensure that people do not have to face problems during the rainy season. The SDM directed the police to immediately remove the unauthorised parking on the road. BSNL and other telecom companies were instructed to immediately remove the wires hanging over the road.
BJP Mussoorie President Mohan Petwal has also demanded a view point near Hampton Court School, while bringing transparency in the allocation of shops built by the municipality and Mussoorie Dehradun Development Authority at Jhula Ghar. He said that Mussoorie MLA and Cabinet Minister Ganesh Joshi has been constantly instructing the officials to develop the Mall Road and to provide basic facilities to the tourists.
SDM Durgapal said that, after the instructions of the government, work is being done to improve the Mall Road by organising frequent inspections by officials. As part of this, onsite inspection was done by him along with the officers of other departments.
The work on beautification of Mall Road is to be done by Mussoorie Dehradun Development Authority in coordination with other departments.
The SDM added that encroachments are being demolished and alternatives provided. In the first phase, some shops have been built by MDDA and the Municipality at Jhula Ghar, which will be given to traders by adopting transparency in allocation of the shops.