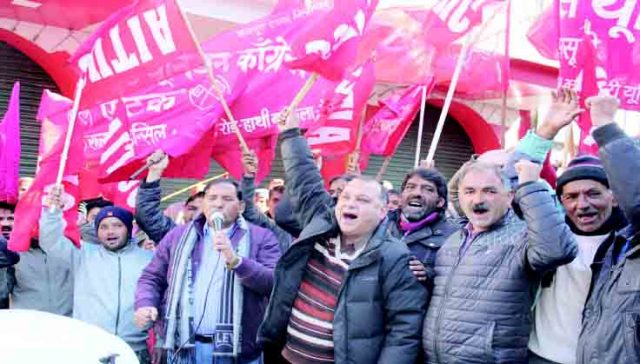 By OUR STAFF REPORTER
Mussoorie, 9 Jan: Activists of trade unions protested against the anti-worker policies of the central government as part of the nationwide two-day strike, here, today. They raised slogans against the state and central governments. They took out a protest rally from Picture Palace to Gandhi Chowk raising slogans against the ‘anti-worker’ policies.
Due to the agitation, a traffic jam resulted at the main square of the town due and locals as well as tourists had to face lots of problems. Trade Union leader RP Badoni, Salim Ahmed, Sobhan Singh Panwar alleged that payscales of the workers were not being given as per the prescribed standards. The governments were making changes in labour laws to benefit the capitalists exploiting the rights of employees. They demanded declaration of the minimum wage for workers immediately. They warned that, if the 12 demands of the workers were not met soon, then a huge agitation would be launched against the BJP governments.
Among those present were Mulayam Singh Pahadi, Devi Gadiyal, Puran Singh, Chetaram, Aslam Khan, Virendra Panwar, Virendra Rawat, etc.

Garhwal Post has established itself as a credible, balanced and forward looking newspaper in India. Based in Uttarakhand, the daily is read by the aware, socially and culturally responsible, high-income elite of society.
Contact us: info@garhwalpost.in
https://garhwalpost.in/best-dating-sites-uk-for-over-50/